Just now I am up in a cold land
And a message has arrived for us to go to sea,
That the ships are now assembled and when night comes
We have to move off with them.

This song was written by Petty Officer Murdanie Macritchie, Brenish, whilst serving during the Second War on HMS Cape Palliser escorting merchant ships on a Russian convoy, PQ-15, from Iceland to Murmansk.  PQ-15 (not PQ-16, as previously thought) sailed from Iceland on 26 April 1942, reaching Kola Inlet on 5 May, after several air and U-boat attacks.  In the convoy were 25 merchant ships that had arrived from various seaports in the UK, plus naval escort ships. An account from English sailor Geoff Hall aboard the Commodore ship, SS Ocean Voice on convoy PQ-16, later in May, gives detail of the run from the Clyde to Loch Ewe to Iceland and then Murmansk, and of being bombed.

To be as far away as possible from the enemy’s airfields in Norway, convoys from Iceland to Russia were routed close to the ice-edge, passing Jan Mayen Island, Bear Island and Novaya Zemlya then heading for the Kola Inlet and the port of Murmansk.  Arctic convoys came under attack from aircraft, U-boats, large surface ships and light surface ships.

For the return journey, HMS Cape Palliser joined convoy QP-12 as an escort, arriving back in Iceland on 29 May.  En route, one day near Bear Island, convoy PQ-16 and homeward bound convoy QP-12 were incessantly attacked by 108 waves of German aircraft.  Seven vessels were lost including SS Lowther Castle, SS Empire Purcell and SS Empire Lawrence.  SS Empire Purcell, on her maiden voyage, was loaded with ammunition and blew up when hit by two bombs.  The Ocean Voice was also badly damaged.

Murdanie Macritchie survived the war and was ordained a minister in the Church of Scotland.  A translation follows the Gaelic song.

Donald Maciver was born in Crowlista in 1857, son of John Maciver, the Gaelic schoolmaster and missionary, and they lived in Ness and then South Lochs.  Donald also became a teacher, at Lemreway (see the school log), Breasclete and latterly Bayble.

The family had come from Carnish, just across the sands, which had been cleared in the early 1850s.  Donald would spend a lot of time in Crowlista with his maiden aunts, Mary, Ann and Effie, who were very enterprising.  Effie used to take a passage to Glasgow, with tweeds and eggs to trade for goods which she sold on her return to Uig.

Donald composed An Ataireach Àrd when he was visiting in Uig accompanied by his uncle Dòmhnall Bàn Crosd, who had had left Carnish in 1851 for Canada.  While they were walking around Carnish, long cleared of all inhabitants, the uncle remarked, “Chan eil nìth an seo man a bha e, ach ataireachd na mara.”

On being asked later about his inspiration, Donald said, “An Ataireachd Bhuan, or the everlasting blustering of the sea on the sands of Uig.  Hero, Donald Ban, an uncle on a visit from Canada.  Scene, Carnish Bay, which he left in 1851.  This finest pugilist in the Island of Lewis in his day shed tears this Sunday afternoon in Carnish.”  The song won first prize in the 1908 Mod.

END_OF_DOCUMENT_TOKEN_TO_BE_REPLACED 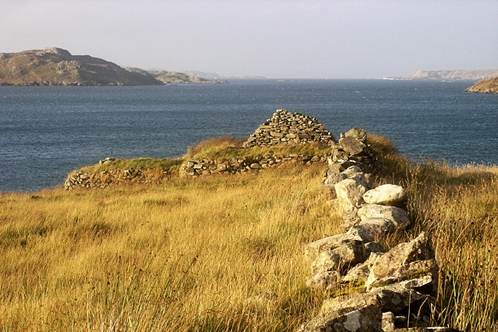 Verses about the boys from the Bays, by Donald Macleod (Dòmhnall Eachainn) of 10 Geshader, who was born in 1874 and spent his working life in Glasgow.  This hasn’t seen the light of day for some time; thanks to the family for providing it.

END_OF_DOCUMENT_TOKEN_TO_BE_REPLACED

Màiri, born 1841, was a daughter of Murdo Maciver and Mary nee Morrison, of Pabbay, 11 Kneep and later 25 Valtos.  She emigrated to the United States and while there suffered greatly with homesickness and composed the song Och nan och, tha mi fo mhulad.  According to tradition she lost her sight with the associated weeping but it is more likely that her blindness was caused by some substance used in her daily work in a laundry.   Màiri did eventually return home to Uig.  Her grandfather Norman Morrison was also blind, a consequence of his service in Egypt with the Ross-shire Buffs (78th).

Does anyone know more verses than these nine?

Norman Macleod, Am Bàrd Bochd, taught at Lochcroistean school from 1936 to 1943, and was a noted bard who composed the following about Lochcroistean and some of the people he knew there.  The last four verses constitute his song about the people of Geshader.

Lochcroistean School was in use until the new Uig school opened at Timsgarry in 1972.  The building housed the Comann Eachdraidh museum for many years and is now a cafe and visitors’ centre. 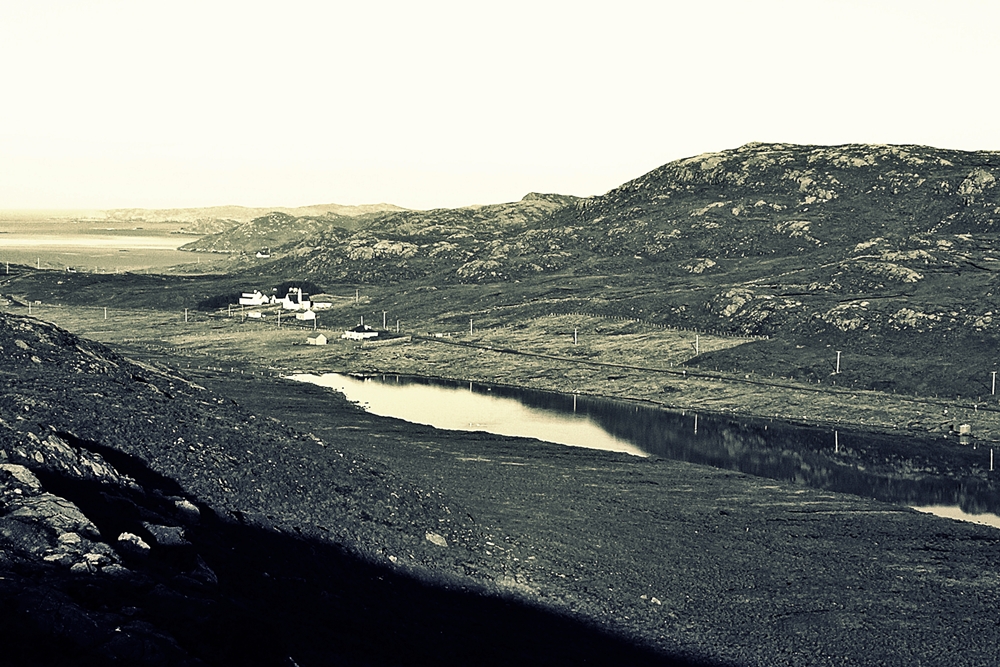 Is slàinte ruit a ghlinn;