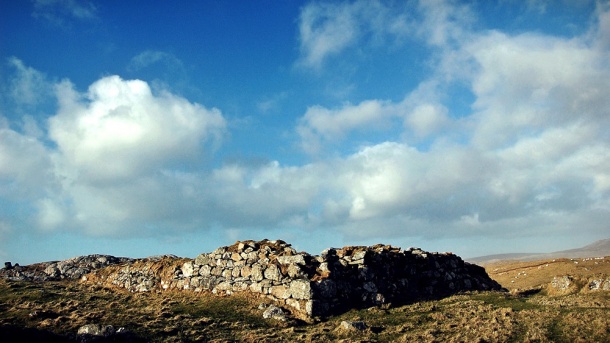 The late 1840s were years of desperation in Lewis (as elsewhere), with much of the population near to starvation and dependent on ‘destitution meal’ from the Proprietor. The solution that presented itself was assisted and effectively compulsory emigration; here are the numbers fixed on for emigration from Uig in 1851.

The late 1840s were years of desperation in Lewis (as elsewhere), with much of the population near to starvation and dependent on ‘destitution meal’ from the Proprietor, Sir James Matheson, who according to the Poor Law Act of 1845 was obliged to do something about his famished tenants. Weakened, overcrowded and in many cases without stock, the tenants were accumulating rent arrears they had little prospect of ever clearing.

Sir James and his Chamberlain, John Munro Mackenzie, proposed that the worst off be helped to emigrate to Canada – see the detailed proposal. In February of 1851 the Chamberlain made his bi-annual tour of the island, collecting rents and deciding which of the families should be asked to go – both to avoid mass famine, and to allow the consolidation of small holdings into profitable sheep farms. The following table is drawn from his Diary (published by Acair) and extracts are below. In the event not all of these families did emigrate, at least not in 1851, though a total of 1772 sailed from Lewis to Canada in May and June of that year.

For the text of the Diary entries – read on.