Mangersta, like most occupied townships in Lewis, was relotted in 1849, with 15 crofts laid out and tenancies and rents allocated. Here we give the full tenant list for 1849-50, with tenancy and family changes up to the (voluntary) clearing of the village in 1872, when the people went mostly to Doune Carloway. 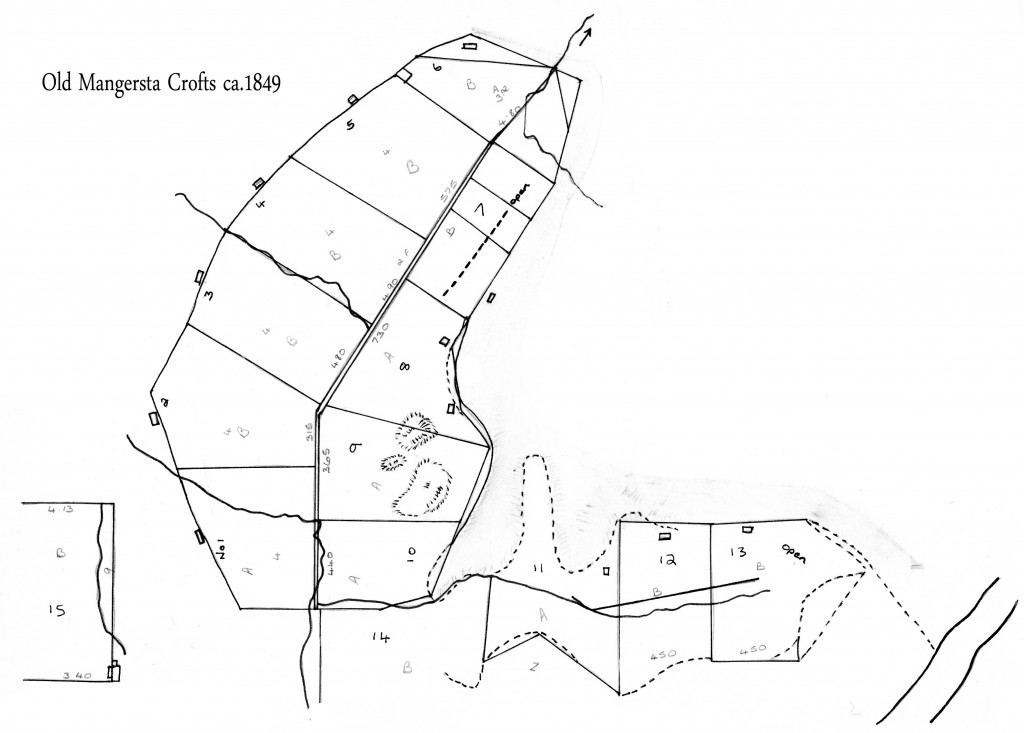 Mangersta, like most occupied townships in Lewis, was relotted in 1849, with 15 crofts laid out and tenancies and rents allocated. Most, if not all, of the original tenants were long-standing inhabitants of Mangersta and the immediate vicinity (though Mangersta had been briefly given to sheep) and they included several members of the family of boatbuilding Macleans.

In 1851 the Chamberlain, John Munro Mackenzie, was having the usual difficulty in collecting half-yearly rents. By the time of his spring tour of the island in February, he had devised a scheme for assisted (and to some degree compulsory) emigration for those of his tenants who were unlikely, based on arrears and stock values, ever to clear their debts. Six families of Mangersta (of which two were willing), comprising 34 people, were advised to emigrate in the summer, when James Matheson chartered ships to carry1,772 Lewis folk to Canada. It’s not clear which six families the Chamberlain had in mind but some correspondence with the information below can be expected. Note that the push to emigrate came after the lotting; and some of the accumulated arrears must have been carried forward from the pre-1849 holdings.

Mangersta, like other townships, struggled on. In 1872 the tenants requested that they be moved to better ground as the exposed site was causing them problems. Most of the families removed to new ground at Doune Carloway. The following croft-by-croft account gives the families in the village from about 1849, and their destination after the end of Old Mangersta.  Compare also the lists of tenants in 1824 and 1867.

From 1872 Mangersta was a single farm, occupied by Donald Mackay and family; it was of course resettled, with 13 crofts, in 1911.

The information below is compiled from old Comann Eachdraidh records and the census; if you can add or correct anything, please do.

The croft was originally let to John Macaulay but he and Angus Maclean (originally No. 8 ) exchanged.

In 1872, these went to Doune Carloway: Angus above, wife Kirsty, children Margaret and John; also son Donald above with his wife Mary and son Angus.

The original tenant was Norman Macleod 32 (TarmodDhomhnaill, a fisherman), his wife Catherine 33 (daughter of Norman Macleod pensioner, No. 11), children Betty 6 and Donald 1.Norman gave up the tenancy but Norman (plus later children Murdo, Norman and Peggy) remained in Mangersta as a fisherman and went to Doune in 1872

In 1872, Peter and Ann moved to Doune Carloway with children John, Donald, Janet and Ann.

In 1872, these went to Doune: Murdo Macleod son of John above, his brother John, Isabella and Catherine.

The croft was originally let jointly to two widows.

The original tenant was Angus Maclean, who exchanged with John Macaulay for No 1.

In 1872, these went to Doune Carloway: Calum, his wife Ann, and children Donald, Catherine, Calum, Kirsty, Betsy and John.

Alexander appears not to have remained in the village after the 1850s so the croft may have gone to one of the new arrivals below.

In 1872 these went to Doune: Margaret widow of Murdo (above), children Calum, Margaret, Donald and Flora.

The original tenancy in 1849 was shared between Murdo and John Maclean below, sons of Calum Maclean and brother of Angus at No. 1.

In 1872, Murdo Maclean moved to Doune Carloway, but after the others.

John and family emigrated to Quebec in 1851; his share of the croft reverted to Murdo 15A

Landless cottars in Mangersta around 1851

New arrivals in Mangersta after 1851