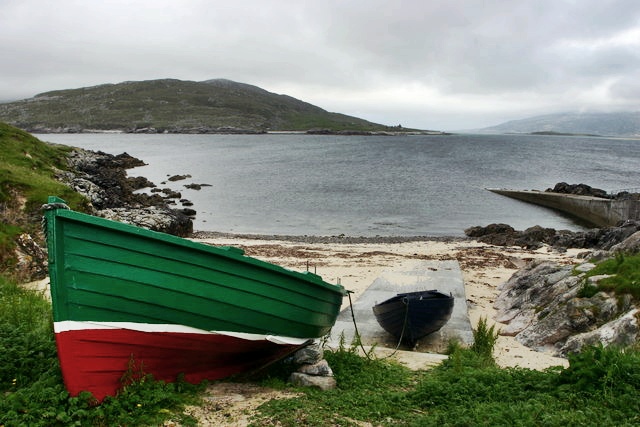 The Uilleam Dubh has been a Scarp boat for many years, and the suggestion was that she was built in Brenish, and/or by a Malcolm Maclean of the famous Maclean boatbuilders of Uig, and called after her builder or owner.

The Uilleam Dubh on the pier at Hushinish; photo by John J Maclennan.

This little story revealed itself in stages: thanks to John J Maclennan especially, and to Finlay Maciver, Shonnie Buchanan and Calum Maclennan Govig for piecing it together.  The Uilleam Dubh has been a Scarp boat for many years, and the suggestion was that she was built in Brenish, and/or by a Malcolm Maclean of the famous Maclean boatbuilders of Uig, and called after her builder or owner.  These Macleans were in Mangersta, which was voluntarily cleared in 1873, and they went to Doune Carloway where they were fishing and crofting.  (In the 1881 census for (new) Doune most of the adults give their birthplace as Mangersta, Carnish or Islivig.)  I don’t know if the boatbuilding continued, but in that case it wouldn’t really have been an Uig boat anyway.

Coming back to Uilleam Dubh, the one by that name who presents himself most readily in Uig is William Maclennan of 36 Cliff, an Iolaire survivor who died of cancer in 1948, leaving a young family.  It transpires William did have this boat for a time, and sold it to Scarp in 1940.  If she had any name at all in Uig, it wasn’t Uilleam Dubh – you wouldn’t name your boat after yourself – but after she was sold she was thus known.

%%wppa%% %%photo=120%% %%size=240%% %%align=left%%The name Uilleam Dubh has a resonance in Harris that it lacks in Uig.  William Longsword (1415-1480) was known as Uilleam Dubh; he was the 7th Chief of Macleod and father of Alasdair Crotach, who is buried in St Clements at Rodel.  Perhaps it was the coincidence that prompted the naming of the boat; I suppose if a Domhnall Cam from somewhere else were to sell a boat to Uig, she would have to become the Domhnall Cam.

Back to her builder now: Iain Maclean in Valtos was repairing and building a few boats about the right time, but the final word from Govig is that she wasn’t built by a Maclean, but by Donald Shaoir, Donald Macaulay of 19 Brenish, son of John Macaulay who built our Rose.  Uilleam Dubh – now laid up – may not sail again but we have another chapter on the little Uig boat that went to Scarp to follow shortly.  She was very photogenic, at the Hushinish pier, so if you have photos of her, we’d be happy to have copies of them.

5 thoughts on “On the trail of the Uilleam Dubh”