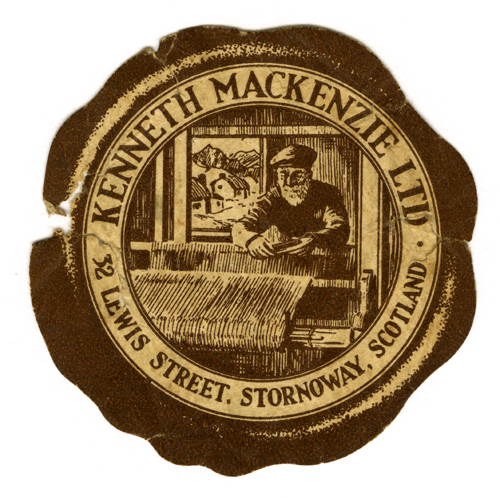 From an article for Uig News by Dave Roberts:

The Harris Tweed industry, according to the traditional story, is said to have begun in the mid-19th century. The two Macleod sisters, originally from Pabbay in the Sound of Harris, were living in a blackhouse in Strond and producing tweeds on their looms. The story is that these were the first tweeds to be called Harris Tweeds and were woven in Murray tartan for the workers on the Dunmore Estate, Harris. After the death of Lord Dunmore in the early 1840s, his widow took over the running of the estate. She was very interested in the tweeds made by Harris crofters, and decided to help in the improvement of the product and its marketing.

In Lewis, the idea of producing cloth to sell rather than just for home use, caught on first in the Lochs district, and then in Uig. Before 1920 Uig and Lochs were reputedly the centres of weaving in Lewis. Around about 1900, the Scottish Home Industries Association, with money from the Congested Districts Board, had set up a depot in Uig to which weavers could deliver their finished tweeds.

In those early days it was the beart mhor (handloom) that was used to produce the tweeds. The shuttle was large and had wheels on the underside and back, and it was propelled across the warp by a sharp pull on a handle. This was known as the ‘flying shuttle’. In Valtos there were at least five, they were owned by: Donald Maclean (10), Malcolm Mackay (7), Donald Macleod (29) and Donald Maclennan (11), and Calum Iain Maclennan at 38 Cliff. In the ‘upper end’ there was a beart mhor at 1 Brenish (Finlay ‘Point’ Maclean), at 11 Brenish (Malcolm Buchanan) and at 8 Islivig (John Macaulay). This large loom was a great improvement on the even earlier beart bheag, which was a small loom that employed a sheep’s shinbone as a shuttle. This was thrown across the width of the loom through the shed in the warp threads. It was mainly the women who used the beart bheag, and the men who used the beart mhor. In the very early days all the processes were carried out on the croft. The wool was sheared from the sheep, washed and dyed, carded and then spun on a spinning wheel, before being woven into cloth. Much of the cloth made on the small looms was for the crofters’ own use, but enough could be produced on the large looms to sell or barter.

In the early years of the twentieth century there were a few carding mills on the island, which helped speed up the production of yarn and in 1906 the first spinning machines were installed in mills in Stornoway. Kenneth Mackenzie Ltd had a spinning mill on Lewis Street. The trademark of the company used the image of Norman Smith of 2 Ungeshader (above), weaving on the beart mhor.   It was now possible for a weaver to take his own wool to be carded and spun for him at the mill. There was talk of a spinning mill in Uig, but the closest was built in Shawbost in 1915. There were meetings to complain about this in Uig, and talks with the weavers in Lochs, but to no avail. There is a story of a Brenish weaver taking his wool over the moor to Tarbert and returning with yarn the same day.

Most of the old handlooms were abandoned in the early 1920s or before, for the very good reason that there was precious little money to be made. An Uig correspondent to the Stornoway Gazette writing in November 1921 sates that “Tweed-making, the principal industry here for many years past, is a failure. Prices for tweeds are so low that it is a waste of time and labour to bother making them at all”. However there were a few of the old looms being used much later. In Islivig, the Rev.Alec Maclennan the Free Presbyterian Missionary who lived in the Missionary’s house from 1947 to 1949, was using the old beart mhor to weave blankets. He would produce two blankets that were then sewn together to make a cover large enough for a bed.