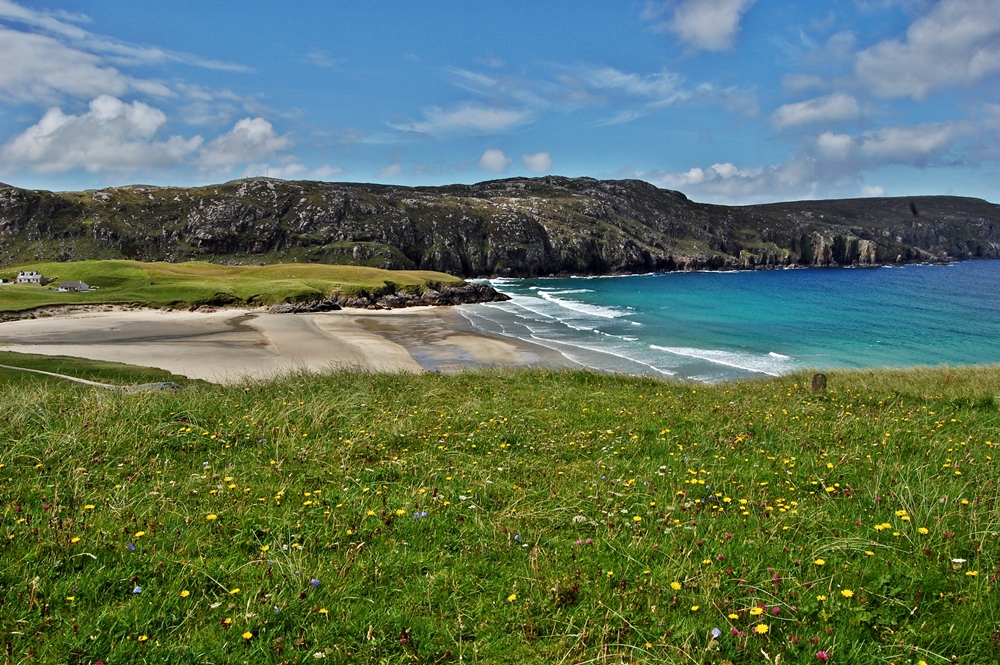 From Rev William Matheson’s History of the Macaulays:

The tradition among some of his descendants today is that Dòmhnall Càm was the least formidable of his father’s sons in point of physical strength.  It is related, for example, that, when at archery practice near his home above one end of Traigh na Clibhe, he was the only one of his brothers who could not make his arrow carry to the bluff at the opposite end of the beach.  But it is added that what he lacked in physique he more than made up in determination and resource.

In his younger days Dòmhnall Càm appears to have fought in the Irish wars.  According to tradition, he took part in an expedition to Londonderry, and made a great name for himself.  It is said that, after the manner of the heroid age, he accepted a challenge to engage in single combat with a champion from the opposing army called “the Great McBane” and vanquished him; a feat, we are told which was celebrated in a song called Ceann na Drochaid.  No song of this name is now known, but it may be that the reference is to a pibroch.  There are, in fact, two pibrochs that ome to mind in this connection, one know as Ceann na Drochaide Mòire, the other as Ceann na Drochaide Bige, though it has been claimed for both of them that they celebrate events in the history of the Macdonalds.

Capt FWL Thomas believed that there was a certain amount of confusion in the above tradition, arising from the fact that in 1495 a battle was fought at a place called Beul na Drochaid, in which one of the opposing leaders was a Sligo chief by the name Dòmhnall Càm Mac Donnachadha.  The indications are, however, that Domhnall Cam MacAulay may well have taken part in an expedition to Ireland.  We know that in the summer of 1595 the Macleods of Lewis were among the island clans who went into considerable force to enter the service of Hugh O’Neill, Earl of Tyrone, then in open rebellion against Queen Elizabeth.  The venture was something of a fiasco owing the English command of the sea.  The action, such as it was, took place on the coast of what is now County Down, and the Macleods of Lewis were soon on their way home, after rather an inglorious campaign.

It will be seen that there is no mention of Londonderry in connection with the events of 1595.  But there is a possibility that the Lewis tradition refers to another expedition of the men of the Isles to Ireland in the previous year, at the invitation of Tyrone’s confederate, Red Hugh O’Donnell.  In July of that year a force under the command of Rory Macleod of Harris landed in Inishowen, and were joined there by the Sleat Macdonalds, Led by their chief, Dòmhnall Gorm.  In the Irish life of Red Hugh we read that he came to meet the Islesmen and that “they were attended and entertained afterwards for three days and three nights with intoxicating ales and every sort of food that was best in the country.”

Dòmhnall Cam returned home, leaving his brother in command, and the united force of Macdonalds and Macleods saw considerable service in Fermanagh before being dismissed on the expiry of their contract.  There is no specific mention of Macleod of Lewis on this occasion but it is quite likely that some at least of his followers would not be slow to offer their swords for hire when there was any fighting to be done; and there is every reason to believe that Dòmhnall Càm would be no laggard in such an enterprise.