Rev DA Macrae was born in Miavaig and lived latterly in Harris. He was interviewed by Maggie Smith in November 2004, and died in July 2005.

Our home Miavaig House was built in 1855 for my grandfather James Macrae, who was the Registrar of Births, Deaths and Marriages and was also an Inspector of the Poor. He was responsible for the Parish of Uig which in those days reached as far as Carloway. At this time there was great poverty and the Destitution Board sent a boat into Loch Roag to deliver meal for distribution amongst the poor. There had been widespread potato blight and I’ve heard of one of the Destitution roads built at this time, in Geshader in this district. This was known as Rathad a’Bhuntata as those building the road were paid in potatoes.

I remember a jetty in front of Miavaig House; this was used to offload the supplies for the destitution stores. The meal store was part of Miavaig House. As the years passed the house was being flooded by the tide, it was eventually knocked down and today Miavaig House is higher up the shore. At low tide the old jetty, used to unload the stores can still be seen today. But in my young days a relative of ours, Duncan Macrae from Callanish had the first motor boat I ever saw, and he brought stores and people to Miavaig pier about three times a week. In those days the Uig people travelled by sea to Callanish if they were going to Stornoway, or any other part of the island, as it saved the very long walk to Garynahine. 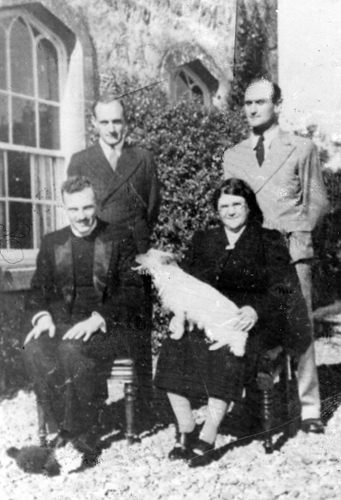 If the travellers were going to Brenish or any of the more distant parts of Uig, they could get tea and sustenance at Ceit Bheag’s. I think Ceit was from Carloway and her auntie, I believe from Brenish, helped her provide hospitality to travellers in a shed beside An Downie’s house.

Kate had a cousin from Carloway, he was Murchadh Jolly, an ex army piper and a member of Stornoway Pipe Band, he came to Miavaig often, I remember another piper from Doune, Carloway ‘Cailleach na Dune’, he had relations in Enaclete and he used to pipe at the weddings in Uig. Then lain an Downie, Miavaig started playing the pipes for weddings. On the other side of the village was the police station where constable Macinnes from Stornoway was married to a Miss Conning, sister of Albert Conning the chemist who had a shop on Francis Street in Stornoway. There was also the house of Donald Macdonald (Mac an Downie) who went to Canada to work for the Sunlife Insurance Company. This company had been set up by TB Macaulay who had Valtos connections.

My own father was William Macrae (Uilleam Sheumais) who had spent time with two of his brothers in Duluth, Minnesota where he had learned to ice-skate. I remember his skates and I’m told that he used to go skating on Loch Geshader as it was shallower and froze over earlier than Loch a’Sgaillear. My father was studying for the ministry in 1883 but had to give it up and come home. My father was married twice. He was widowed with two daughters, Sine who was later a teacher in Crowlista School and Maggie Bell who was brought up by her mother’s sister in Berneray, Harris. Some time later he remarried my mother, Kirsty Mackay of Valtos whose family later moved to 7 Reef.

When I was born, my father had taken over as Inspector of the Poor and Registrar of Births, Deaths and Marriages and also had the post office for a while. My father died when I was five years old and we had to leave Miavaig. My mother was fortunate in that she got half a croft at 35 Cliff. There was enough ground to keep a cow and some sheep, and good ground to grow potatoes for her young family of four children.  There was James, Alec John, myself Donald Angus and my sister Jessie, born the year my father died. My mother’s only income was from being the new Registrar and the cow was a blessing that helped to provide the food we needed as children.

I went to Valtos school and joined the other forty children on my class (see picture), being taught by Mr Roddy Morrison from Ness. My mother later returned to live in the Nurses cottage, Miavaig as the Registrar.