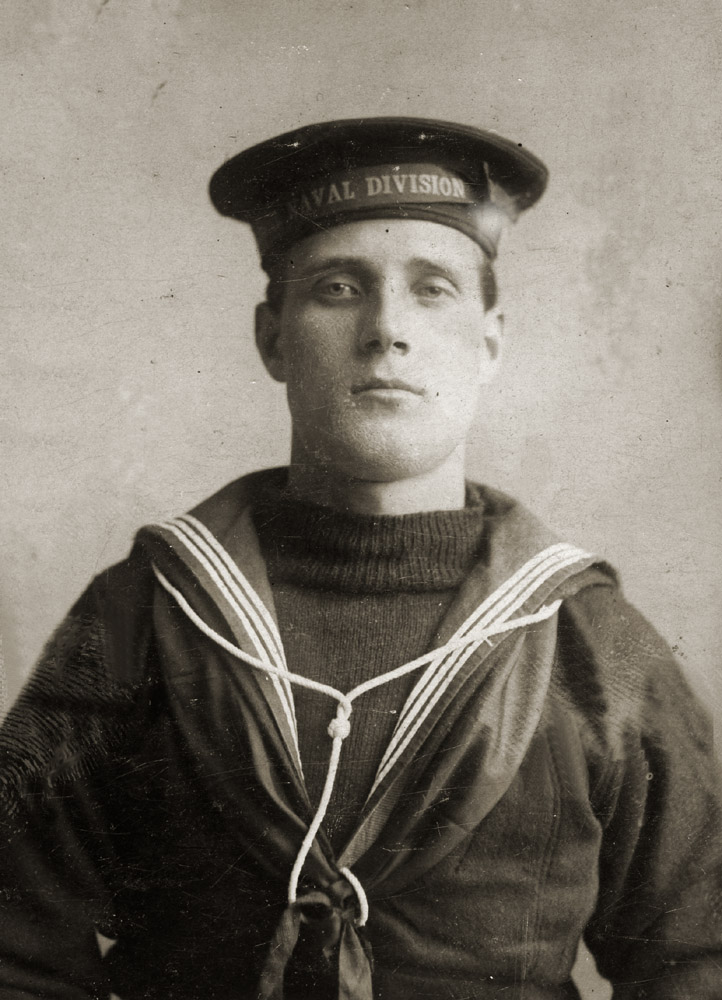 This unidentified sailor with the Naval Division is believed to be one of those interned in Holland in 1914.  The picture was taken at Groningen, and comes to us from 10 Mangersta.  Is he one of the Uigeachs listed below who spent the war in “HMS Timbertown”?  The following was written by Dave Roberts for Uig News; more information about the 106 known internees from Lewis, and the conditions they experienced, are found at Guido Blokland’s comprehensive website.

On 5 August 1914 the postman delivered buff-coloured envelopes to all the reservists. War had been declared. There was no reluctance to answer the mobilisation call, and those on the Island made their way immediately to Stornoway, thence to Kyle of Lochalsh, and eventually to one of the Channel ports.  The most pressing military need at the time was for infantrymen, not for ships’ crews, so the Naval Reservists found themselves issued with a rifle and ten rounds of ammunition. Their training had been as crew for warships, and the handling of big naval guns, not as infantrymen! But on 5 October they were transported to Antwerp in Belgium, via Dunkirk, to attempt to defend the strategic port from the advance of the Kaiser’s Army. The defences were built in the nineteenth century and were no match for the heavy artillery or the devastating fire from the ‘Big Bertha’ mortars. The ill-equipped and inadequately trained Naval Brigades had no chance and held out for less than three days.

They were facing overwhelming odds, and despite orders that they were to defend this strategic deepwater port at all costs, it was obvious that a retreat was necessary. There were also specific orders that on no account should the Naval Division be caught in Antwerp. Eventually the orders came to fall back, and two of the Brigades did so, but for some hours the third remained ignorant of the withdrawal. 3,500 men reached the Burght, crossed the River Scheldt by pontoon bridge and marched to St Niklaas, where they boarded trains and escaped. The other 1,500 men of the First Brigade, consisting of Hawke, Benbow and Collingwood Battalions, finally got their evacuation orders but when they arrived at the river the bridge was no longer in place. Fortunately there were some small boats available for ferrying them across, but valuable time had been lost. They arrived exhausted at St Niklass early on the morning of 9 October.

All the transport had departed and they were forced to continue on foot to St Gillis-Waas. There they discovered that the railway had been blown up, and they were almost completely surrounded by enemy troops. In fact some of the Naval Brigade had already been captured, including John Maclean Ungeshader (Shonnie Gorabhaig), John Buchanan Brenish, John and Angus Maciver Crowlista, and Donald Mackay Valtos. Only three of the Uigeachs who were sent to Antwerp managed to escape that day: they were Kenneth Maciver Geshader, Donald Macritchie Aird and Angus Mackay Valtos. The rest were now facing capture, being wounded or even being killed by the fierce bombardment they were suffering. Commodore Henderson was in charge and the lives of his men depended on him making the right decision. Reluctantly he chose the safest option: rather than become prisoners of war, they would cross the border. Once they were on Dutch soil, and had surrendered their weapons to the Dutch Army, they became internees in the neutral country of Holland.

The forlorn remnant of “Winston’s Little Army” spent their first night in Holland sleeping by the roadside, without any food. They were starving, and some resorted to stripping meal from dead cows that they found in the fields, and eating it raw. The next day they were taken under armed guard to Groningen, forty miles to the west. At first the security was very tight. A rule of neutrality was that ‘prisoners’ who had sought refuge as a way of avoiding capture by the enemy should not be permitted to escape or return to active duty. In order to protect its neutral status and avoid occupation itself, the Dutch Government was determined to give no favours to the refugees, so the treatment was generally harsh at first.

To begin with, they were housed in the Rabenhaupt Barracks in Groningen, which were temporarily vacant. After three months, the men were moved into huts especially erected for them next to the State Prison. This new accommodation was soon to become known by the inmates as “HMS Timbertown”. The nickname was derived from the wooden huts, and the fact that they housed sailors, not “infantrymen”. Each hut was fairly large and had a number of stoves, but internees complained that in the winter, especially at night, they got very cold. In the summer the ventilation was not adequate and the huts became hot and stuffy. The new camp was on the old parade ground with the barracks perimeter fence on one side, and the Sterrobos woods on the other. The Rev Lamont, writing in The Stornoway Gazette of 25th January 1918, observed “imprisonment behind barbed wire, in the flat and featureless countryside must have been very hard for Lewismen so used to the hills and the sea”.

The food was meagre but just about adequate. Some of the men complained that the only meat they got was horsemeat. It had very little fat on it but most of the inmates eventually grew accustomed to it. Others complained that the meals provided were too fatty! Each man received half a loaf of bread a day. It tasted as though it was made from potato peelings and grain husks! Later oatmeal appeared, and porridge was taken daily. Eventually it was agreed with the authorities that the internees could do their own catering, as long as they stayed within the permitted budget. Tea was a rare treat, and letters home begged for supplies. However things were tight in Uig too, and tea was just as scarce here – so unfortunately for the internees there was none to spare.

As time went on, negotiations between the Dutch and British Governments led to a slackening of the strict security, and somewhat better conditions. Inmates were allowed ‘shore leave’ for a few hours, which meant that they could go into the town of Groningen. Some of the men had already struck up friendships with local girls through the fence, so now they could go on dates to the local cinema with them.

On Sunday afternoons, the “Englische Kamp” had become a sightseeing attraction, and townsfolk came to gawp through the fence at the sailors. The inmates were a novelty, and at first many of them felt like monkeys in a zoo. The camp itself was soon to open for two hours on Sunday afternoons, so that townspeople could visit. They came to watch football matches, to attend concerts, and to provide entertainment themselves. Local musicians, choirs and opera groups performed in the camp. The internees also gave concerts in the town for local people to enjoy.

Astonishingly, by 1916 home leave was being permitted. Ostensibly this was only granted on compassionate or medical grounds. A letter from home to the effect that a brother had been killed, and the family needed help on the croft, was considered enough. The family doctor generally wrote the letters. One request was granted because it was harvest time and the interned sailor’s mother was a widow. Angus Macdonald had at least two periods of leave during the four years, each of one-month duration. He dutifully returned each time, so that others could have the same privilege in their turn. The rule was that if anyone failed to return from leave, then the privilege would be withdrawn from everyone. Needless to say the feeling of companionship and trust among the men meant that no one broke the rule. It is thought that Malcolm Buchanan of No 11 Brenish also came home on leave.

Everyone predicted that the war would be over by Christmas 1914, but in fact it dragged on another four years. For the First Naval Brigade, now interned in Holland for the duration, the greatest difficulty was coping with the long hours of inactivity. This was a problem for both the British and the Dutch and there were guards appointed by both sides to prevent any trouble occurring. The Dutch authorities were unable to understand why the men could not be sent home, but the rules of war stated that the internees should not be permitted to take any further part in hostilities.

Activities were therefore organised to reduce the boredom. Books and materials were sent out from Britain. Study courses were arranged for the sailors. Angus Macdonald attended first aid and navigation classes, and he recorded what he learnt in a small notebook. Some of the men studied for exams and were able to sit them in the camp. At least one sailor studied for the ministry and many earned merchant seamen certificates. A number of groups and societies started up including drama, music and crafts. There was soon a thriving cabaret company who put on regular concerts.

The men were permitted to take on work outside the camp. Some worked in coalmines, some in shipyards and others on farms. There was a knitting club, and the sailors produced jumpers and socks, both for themselves and to sell. Others who had the skills already made trinket boxes and other wooden items also for sale. Some of these items were shipped back to Britain and sold at Selfridges in London. The money earned could be used to purchase extra food and essentials and for other activities such as trips to town to the cinema or bars.

As the war dragged on food became scarce in Holland, and in camp its quality and quantity deteriorated seriously until even rats were caught and eaten. Donald Maclennan was so desperately hungry that on one occasion when they were working on a farm he and his companions caught and killed a sheep. They decided they would have to eat it raw so as not to draw attention to themselves by lighting a fire.

The confined nature of the camp meant that the only exercise possible consisted of groups of men walking around in circles. Later compulsory route marches under armed guard were organised, along the banks of the “stinking” canals. As time went on the men were able to enjoy sporting activities such as athletics, cricket and their favourite, football. There were numerous teams in the camp who played against each other, and later there were matches against local Dutch teams.

Uigeachs who went to fight for King and Country. They had returned fairly unscathed or damaged by their experiences. Despite being jokingly accused of “sleeping in Holland for four years”, they were not cowards. They may have had doubts themselves about whether they had “done their bit” for their country. Possibly they felt that surrendering to a neutral country would not be seen as a very brave thing to do. When I spoke to people who had known these men, they could give me very little information. This was due to the reticence of the internees, over the years, to talk about their experiences. Some wondered whether the reluctance to talk was due to embarrassment about the whole thing.

See also a wee note about remittances from home.