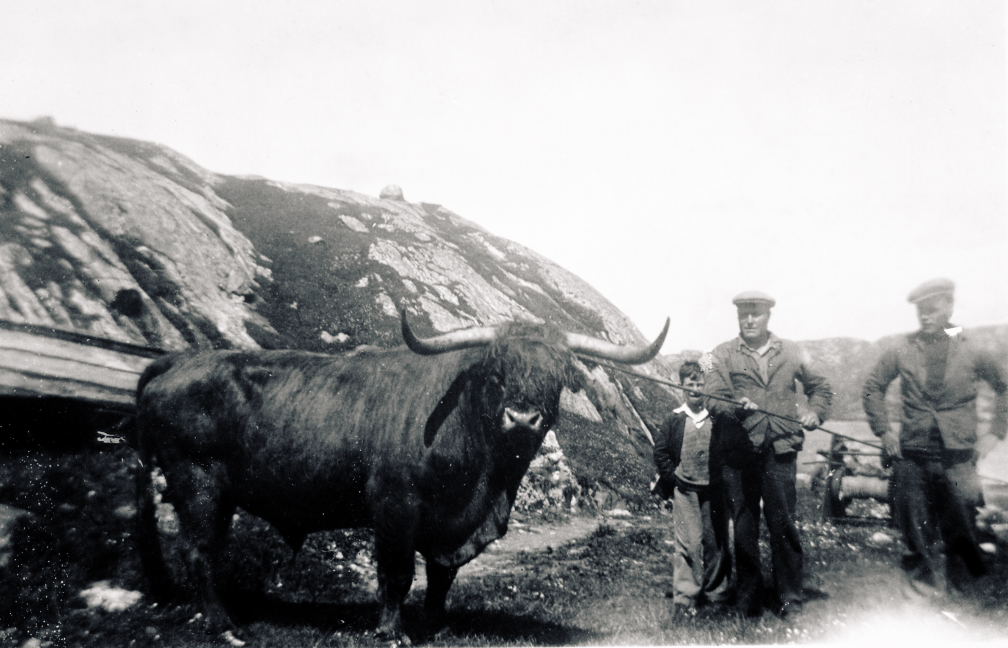 One of the popular schemes of the Congested Districts Board (1898-1912) was the provision of bulls, rams and stallions, on loan, to crofting parishes where the stock was in need of improvement. Uig did particularly well on the bulls, it seems.

One of the popular schemes of the Congested Districts Board (1898-1912) was the provision of bulls, rams and stallions, on loan, to crofting parishes where the stock was in need of improvement. This wasn’t the first attempt to improve stock with the introduction of bulls: evidently Sir James Matheson spent £1200 doing the same, during his time as Proprietor of the island.  From 1898, the Board issued an annual notice regarding the scheme, of which this is a typical example:

The Congested Districts Board are prepared to supply a limited number of bulls for use in Townships or Districts in Congested Parishes, and Crofters’ Common Grazings Committees desirous of making application for these animals should now do so.

All applications by these Committees must be made on printed forms, of which copies may be obtained on application from the Secretary of the Board.

It is essential that applications be in the hands of the Secretary before 27th January 1901.

It must be distinctly understood that the Committee will be responsible for any damage done by a bull while in their custody; also, that all expenses in connection with the wintering of the bulls shall be paid by the recipients, who must, in every case, make satisfactory arrangements for the keep of bulls during the winter following each service season, until the Board removes the bull in ordinary course of their arragements.

The bulls will remain the property of the Board.

The Board was supplying Highland bulls in the west, Shorthorn or Polled Angus in the north, according to the preference of the crofters. In 1900-01, for instance, 45 bulls were sent out, 34 Highland to Tiree, Skye, the Western Isles, Wester Ross and Sutherland, and 8 Polled Angus and 3 Shorthorn to Caithness, Orkney and Shetland. The demand was greater than the amount the Board could supply and they were obliged to judge where their bulls would be of best use. In 1904, the progress to date was reported, including some Uig dispatches:

Aird: Supplied first in 1899. Cattle small and badly bred. The people have paid some attention to the gets of the bulls and kept a good many of them. Their young cattle are much improved in every respect. They have a second bull now.

Callanish: Supplied in 1902. Cattle very small and badly bred. They have kept very few of the gets of the bull. Those they have are a wonderful improvement on the old stock, having a good coat and good bones.

Haclete: Supplied in 1902. The class of cattle here is small and badly bred. there is not very much improvement to be seen as yet. The people are very thankful for the bull.

Valtos: Supplied in 1900. Cattle small and badly bred. They kept as many as they could of the young cattle, and consequently their stock is much improved. They have a second bull now.

Miavaig (for Kneep): Suplied first in 1899. Cattle a fair class. They kept a good many of the bull’s gets, and took good care of them. They got another bull in May 1903. They have now calves between the second bull and the first bull’s heifers, and they look very well. This is about the best case of improvement I have seen in the Lewis.

Crowlista: Supplied in 1904. Cattle small and a mixed class. They will take time to improve.

Tobson: Supplied first in 1899, and again in 1904. Their cattle were a small, badly-bred class. They are now improving, and beginning to show something Hihgland in coat and bones, but the set of horn is still farm from right.

Breasclete: Supplied first in 1900. Cattle very small and badly bred. They did not keep very many of his gets. Those they have kept are an improvement on the old stock. They have a second bull now, and they promise to look better after his gets.

Dalbeg: Supplied in 1901. The cattle in this district are rather a mixed lot of several breeds, even polleds. Their cattle are not very much improved yet, but some of the young cattle have better hair and better bone.

Tolsta Chaolais: Supplied in 1901. Cattle small and badly bred. They have kept some of the bull’s gets, and they are an improvement on the old stock. They should have kept more of them.

In 1908, a further report shows that the scheme continued at about the same rate.

Up to the beginning of the financial year 1908-9 we had purchased in all [since 1899] 412 bulls, which were lent to Grazing Committees on condition that proper arrangements were made for the care and wintering of the animals. In December 1908 we issued our usual notice […] for bulls, and the following distribution was made of 48 bulls:- [The majority to Skye, Harris and the Southern Isles; in Lewis, just one Highland, to Barvas.]

We have endeavoured to buy our Highland bulls from breeders as near the districts to be served as possible. We are now in touch with so many of the breeders of the best West Highland bulls that we are able to buy direct from them for delivery in May a considerable number on satisfactory terms. this not only obviates the heavy expense for keep which resulted from purchases at the February sales, but the animals are not so heavily fed as they would in that case be. But purchase at the public sales has considerable advantages, and we have always reverted to them for bulls that can be delivered soon after the sales.

As we have stated before, there is ample evidence that our bulls are doing great good to the cattle of the congested areas. This opinion is shared by the crofters and by authorities on stock conversant with the destricts, who urge us to extend our supply of bulls, and in this year of 1909 we have been able to secure and exceptionally good lot of suitable Highland bulls. If the crofters in the west could combine to reduce their ‘souming’ and give their young stock a chance to grow, the improvement would be large and immediate. Even as it is, they get better prices, and they carry out our conditions as to wintering with, as a rule, admirable fidelity.

The following year, Uig was praised for having made best use of the scheme; Barvas and Lochs were doing less well with it, especially the latter where it seems the cattle were very poor and inbred to begin with:

The Parish of Uig in Lewis has been having the use of CDB bulls since 1899. Some of the townships in this parish have been paying a good deal of attention to their cattle, in teh way of keeping the best beasts to breed from, and the results are very satisfactory. There are some very nice, well-bred young cattle to be seen in some parts of the parish.

In total, 679 bulls were provided to the seven counties; three came to Uig in the last year.  After the CDB ceased to exist, in 1912, a similar scheme was continued by the Department of Agriculture into the 1960s. The bulls were overwintered in sheds around Uig, one of which can be seen below the cemetery in Ardroil, and another by the shore in Crowlista using the walls of the old school.  Some of the bulls were swum out to small islands, which occasioned the loss of the Geshader bull in the 1930s.