We’ve been recording the abundant pew graffiti in Baile na Cille church – it’s a common phenomenon, evidently. Here are some thoughts on the motivation behind the scratching. 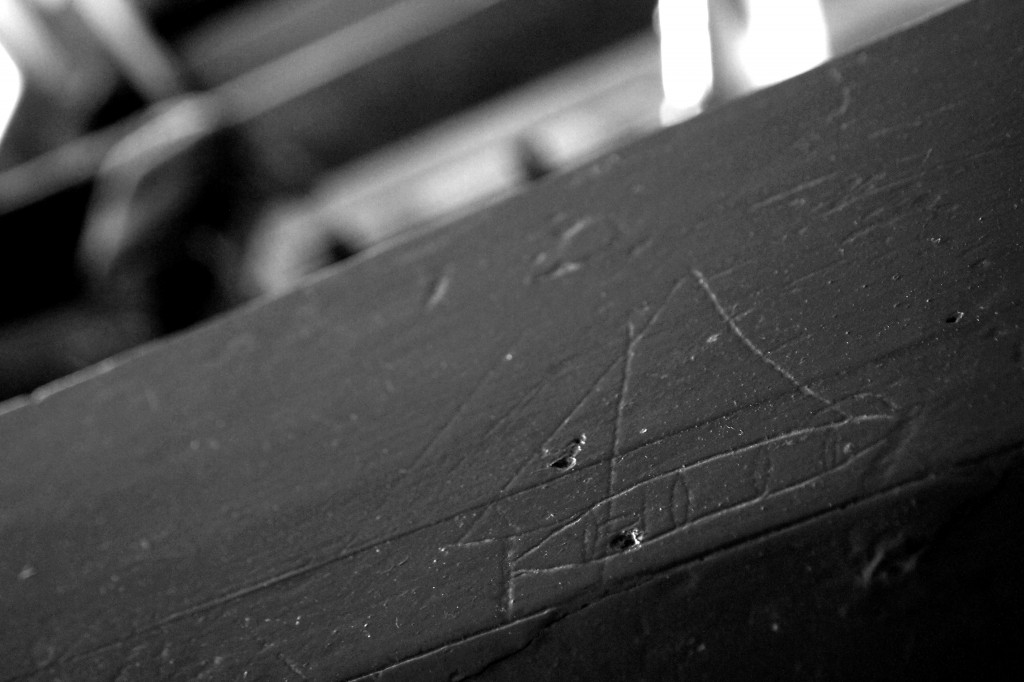 Island churches are still immune from vandalism (with some notable lapses in 1900) but there is a venerable tradition of scrawling initials, dates and even little pictures on the church pew, a diversion all the more readily accomplished in the days before electric lighting. The pews of Shawbost Free Church are replete with such memorials from the 1920s and beyond, though the odds of ever identifying an ‘MM 1934’ or a ‘JMcL’ are passingly remote. I had not long occupied my present pew in Stornoway when I noticed the immaculate sketch of an Imperial German officer, over the neatly printed ‘BOSCH 1918’. But who drew it we cannot now know, and it is unlikely he survives.

MacDonald’s take on this is interesting. ‘These graffiti are not very controversial. They do not “adorn in order to desecrate”… rather they are a powerful reminder that the space of worship belongs to the congregation, purchased by their tithes and, in some cases, actually built with their labour. Graffiti must be interpreted as proprietorial statements: this is our space. Accordingly, these are very Presbyterian transgressions, breaches of etiquette which affirm the ultimate authority of pew over pulpit.’

The MacDonald quote is from Towards a Spacial Theory of Worship: Some observances from Presbyterian Scotland, by Fraser MacDonald, Social and Cultural Geography, Vol 3 No 1, 2002.

Clearly this isn’t unique to island churches; if you have other examples, please share them. One of the most famous instances in Scotland is the names of the ‘Wicked Generation’ of Glencalvie, who camped in the churchyard at Croick in Sutherland in 1845 when they were cleared, and scratched their names on the windows.

See more of our graffiti here.