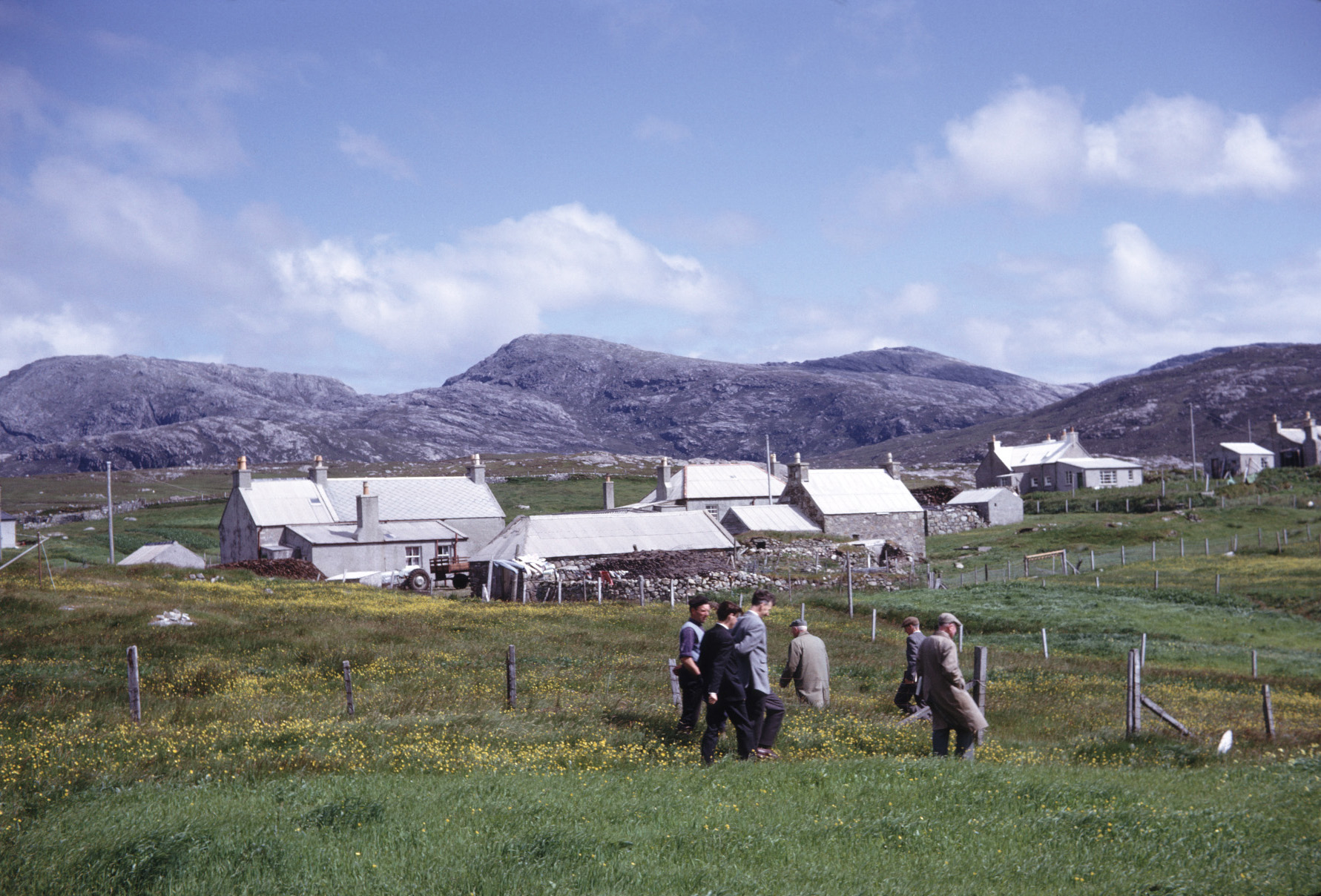 Brenish and Islivig are old settlements, never cleared. In both, the sites of the original clachans can still be seen clustered around the mouths of their respective streams. The houses are now situated at the east end of the crofts, near to the road…

From Uig, A Hebridean Parish, 1960. The photo of Breanish is by Sam Forrest, taken on land court business in 1965. More of his pictures in the gallery.

Breanish has a south-westerly aspect whilst Islivig faces north-west; in both the elevation of the crofts decreases seawards from about 125 ft in the east to 50-25 ft in the west. Only on croft in Islivig, and the eight most southerly crofts in Breanish, run to the sea – the rest obtain some shelter from a line of low hills about 300 yards wide and rising to a little over 100 ft, which forms their western boundary. In Breanish and Islivig the soils are mainly peaty, becoming wetter in the west. Where visible the subsoil is gravel or stony boulder clay. There are no trees or shrubs and vegetation consists of marshy grass moors in the Mealista area with a considerable amount of cotton grass bog further north.

Breanish and Islivig are old settlements, never cleared. In both, the sites of the original clachans can still be seen clustered around the mouths of their respective streams. The houses are now situated at the east end of the crofts, near to the road. To the south, Mealista – cleared in the 1840s to make a sheep farm – was divided in 1921 to give enlargements to the common grazings of both Brenish and Mangersta. The arable land was divided into 29 shares as enlargements to Brenish crofts, and is held in a modified form of runrig.

Breanish, at the end of the tarred road which also serves Islivig, is 40 miles from Stornoway. on the thrice weekly bus the return fare to Stornoway was £1, and fright cost half-a-crown for a hundredweight, but because of competition from privately owned vans the bus service ceased in 1960. General merchandise, fish and meat are supplied by weekly vans; there are no shops. There is a post office at Islivig; banking facilities are supplied by a mobile bank.

There are now no thatched houses inhabited in the townships and most houses have kitchen and other extensions added. Some crofters have built concrete two-story byres of modern design. In Breanish, where the hills to the east provide a good catchment area and the Brenish river a good source of supply, all the crofts have their own private piped water supplies, while in Islivig and Mangersta most crofts now have, or are getting, a water supply. All croft houses are supplied with electricity from the grid.

Commercial fishing has long ceased and as there are only three boats, there is now very little fishing for domestic use, the principle use of the boats being to ferry sheep to the off-shore islands. Weaving is an important occupation. There are seventeen weavers [in the Upper End] – nine in Breanish, two in Islivig and six in Mangersta, and during 1959 they were kept busy; in 1958, however, few orders were received. Weaving cannot be said to bring in a steady income here, and some of the weavers, and others, find additional employment outside the township. This includes four men at the hydro-electric scheme at Gisla, three at Mangersta Ministry of Civil Aviation station, three at Aird Uig RAF station and at least one in the Glen Valtos quarries. In addition, one man owns a tractor which he hires out and one, owning a lorry and van, does haulage work. Altogether, out of a total of 27 men under the age of 65 who do work, all but three (one just out of school and one a semi-invalid) have other employment in addition to their crofts.

The total population for the three townships (Breanish, Islivig and Mangersta) is 121 residents, and 14 permanently away from home. Of the residents, 28 are children, 47 are in the 15-45 age group, 15 are in the 45-65 age group and 31 are over 65. The relatively young population may help to account, together with the better soils, for this area giving an impression of a fairly prosperous crofting district compared with some of the others in Uig.

More on the crofting practises >>