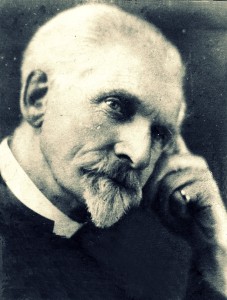 Calum Aonghais a’Bhreabadair was born in Valtos in 1862, a son of Angus Maclennan who had travelled the world. The family moved to 11 Kneep. Calum went to Canada as a young man and studied at McGill University in Montreal. He worked for some years as a minister in Canada before returning to Scotland and St Columba’s in Edinburgh, where he remained for 34 years. He had two sisters who were deaf; Chirsty remained in Uig as housekeeper in the Manse, and Mary Ann went to Canada to become a teacher for the deaf.

Rev Maclennan was a staunch supporter of the Gaelic cause. He was a member of the executive of An Comunn Gaidhealach, worked towards the Gaelic clause in the Education Act of 1918 and compulsory Gaelic education and represented the United Free Church on a deputation to Parliament. He edited a Gaelic Reader, the Gaelic Bible for the National Bible Society and the Gaelic New Testament; and produced a revised edition of MacAlpine’s Gaelic dictionary in 1925, re-issued by Acair and Mercat in 1979.

He championed the cause of the Reef Raiders in 1913 and played a role in securing their early release from prison. In 1929, he welcomed TB Macaulay to Uig and gave the speech that begins “A Dhaoin’ Uaisil Uig!“. Rev Maclennan died in 1931.