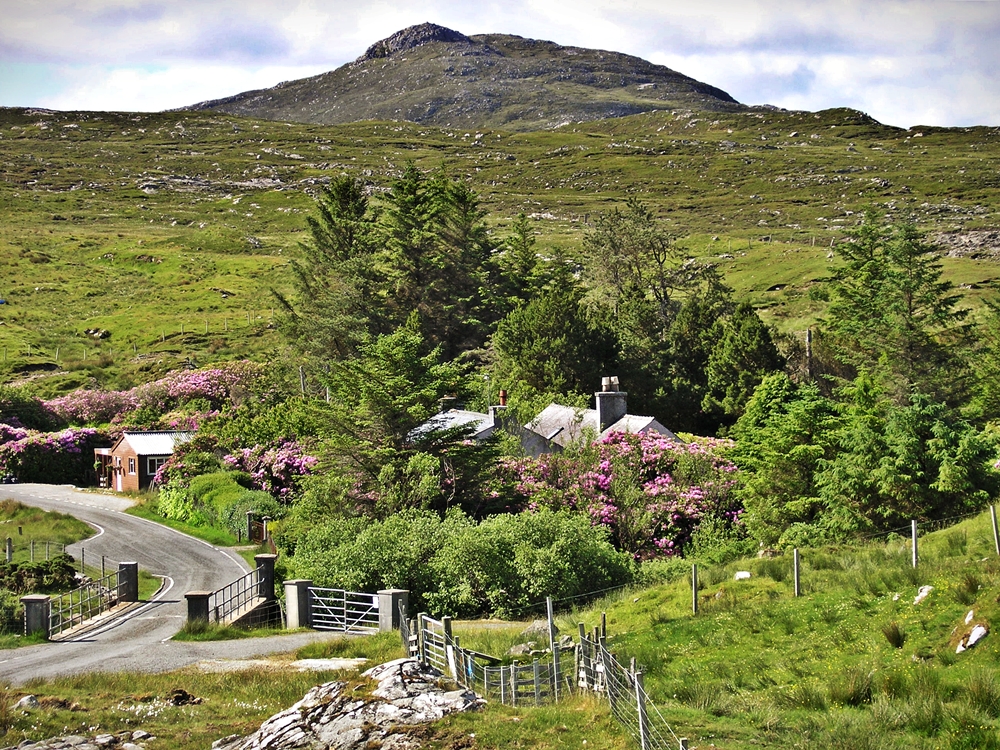 From Emily Macdonald’s Twenty Years of Hebridean Memories (1939).  Emily and her husband Dolly Doctor owned Uig Lodge but it was permanently let to tenants.

On our next two holidays in Lewis, we managed to get rooms in Uig for a few days’ visit to the part of the Island we loved so much.  But there were few rooms obtainable for love or money, and more and more people wanting those few, so we began to think we must set about obtaining a little house for ourselves in the district.  The Lodge was still let and we saw no prospect of being able to live in it for many a year on account of the expense.

Gisla at once presented itself to our minds as a suitable spot in which to build an easily-run house of the bungalow type.

Gisla is included in Uig, and therefore belonged to us, but there was a difficulty to be overcome before we could tart building.  The old farmer-crofter who lived at Gisla had, under the Crofters’ Act, the full grazing rights of the place, and on going over to interview him, we found him to be extremely “land-conscious.”  Therefore, it was no easy matter coming to an agreement with him as to where we should build.  We could, of course, have applied to the Scottish Land Court to resume a piece of land for our own use, and many years afterwards we had recourse to this proceeding when we found we required more land for a bigger garden.

But at the time, we felt we would rather approach old Duncan Maclean [Donnchadh Ghiosla] direct, and if possible come to an arrangement which would be agreeable to both sides.  At last a site was chosen, and during the winter of 1925-26, local masons started laying foundations and putting up gable ends according to a plan made by ourselves.  Back in London once more, we were visiting the yards of the makers of portable bungalows, and looking through their catalogues.  By April, the woden framework, asbestos walls and tiles and all the attendant paraphernalia of a little house were on order or actually on their way to Gisla.

My husband’s youngest brother Malcolm, or “Balla” as we called him, had just finished at Aberdeen University, and was going to take a long holiday before going to Cambridge for further study.  It was arranged that he would go over the Gisla and supervise the erection of the wood and asbestos bungalow on teh foundations and between the gables of local stone, which had already been erected.  We had previously had a wooden garage put up, and this, with an American stove installed, made a comfortable enought camping place for our supervisor Balla and his chief assistant, John Maclean, a Lewisman living in Glasgow.  The John Maclean was an enthusiastic singer of Gaelic songs, so the bungalow went up to the accompaniment of Hebridean melodies…

Away in Lewis my brother-in-law was busy getting on with the building of our bungalow, and he put in a great deal of hard work at it, his idea of supervising being to take a hand in all the work himself.  Undoubtedly this is an excellent way of getting the best out of one’s workment, but I strongly suspect that in Balla’s case, no on e worked harder than himself.  Anyway, when at last we saw our little moorland home completed, we were more than delighted with it, and extremely grateful for all his help, without which it would not have been the same place.  Its atmosphere of cosy homeliness is appreciated by all, and the large open fireplaces in which the peat burns so cheerfully and fragrantly are always a source of admiration.

The view from the sitting room and two main bedrooms is over a short stretch of moor to the sea-loch of Little Loch Roag, and the undulating moor and hills beyond.  What a peaceful, restful view to gaze upon!  And though such a quiet scene, it is always changing and one never becomes tired of it.  The loch is so different with the ebb and flow of the tide, or the changing of the wind, and the hills vary from hour to hour, often from minute to minute, with sun and cloud effects.

2 thoughts on “Building the House at Gisla”