Rev Col AJ Mackenzie, born 1887,  was the son of Roderick Mackenzie, gamekeeper at Kinlochresort and subsequently at Uig Lodge.  The young Alick spent his early years at Kinlochresort before moving with his family in 1891 to the keeper’s house near the Lodge, overlooking Traigh Uig, which clearly made a lasting impression on him.  The story of the journey from Kinlochresort is here. 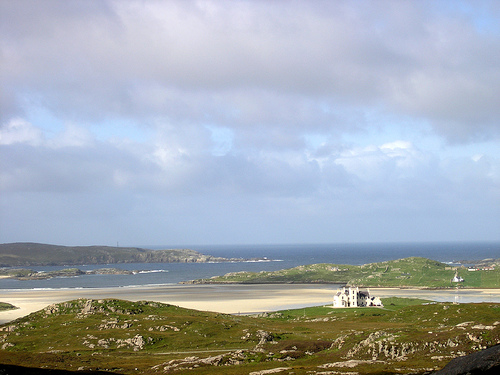 The next day dawned a bright and beautiful spring morning. None of us ever forgot the glamour of that first April morning in sight of our new home. Perhaps the thing that struck me most was the change in prevailing colour. Instead of the somber dark brown that dominated our former surroundings, here was a variety of colourings, shading into another and producing a total effect unlike anything we had seen before. We were fascinated with the silvery whiteness of the Great Sands surrounded with hills, machair and fields of the deepest green where later on we used to find the most extraordinary variety of wild flowers. Then there was the azure blue of the sea and the darker blue of the surrounding mountains of which I have already spoken. Beginning with Mealashal at the south west and continued beyond Suainebhal till they gradually declined into the sea towards the Gallan Head in the west. When the setting sun poured its golden glory on this panorama the effect was something that can only be described as breath taking, from the very first day our new home laid its spell upon us. To all of us, young and old it remains the dearest and most wonderful spot on earth.

Here were ideal surroundings for a boy to grow up in. Every kind of adventure was possible here. There was something new for every day and no one knew what a new day might discover for us. There were caves and deserted villages to explore: bathing, fishing and shooting were daily occupations in their seasons. There was a constant lure that drew us into new fields and new interests the distant waters glancing in the sun the murmur of hidden burns that called for discovery, the muffled roar of distant waterfalls and the sustained song of the skylarks high in the clouds. All combined to make an earthly paradise for a growing boy.