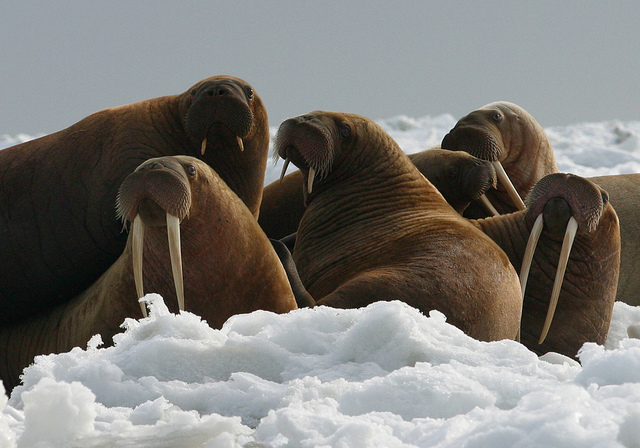 Some recent thoughts on walrus tusk and what we might yet learn about our Chessmen.

Ross DE Macphee PhD, Curator of Mammals at the AMNH, proposed in a recent paper that further study of the (single-species) walrus may provide insight into the origin of our Chessmen:

Some have argued that the Lewis Chessmen were created in Iceland rather than in present-day Norway. In this regard, the prehistoric distribution of Odobenus rosmarus may be of some interest. During the last ice age, or Wisconsinan glaciation (about 100,000 to 10,000 years ago) the higher latitudes of the northern hemisphere were mostly covered by enormous ice masses. In North America, where Wisconsinan ice extended to the latitude of New York City, walrus fossils have been found as far south as Cape Hatteras, North Carolina. In western Europe, Pleistocene walrus fossils are rare, but they clearly enjoyed a range that extended along the margins of the North Sea at least as far south as the northern British Isles. Although the ice progressively withdrew after the end of glacial times, walrus populations would have remained much longer in favourable areas. The famous 1539 Carta Marina, for example, pictures a ‘rosmarus piscis’ coming ashore on the coast of Finnmark, near present-day Tromsø in Northern Norway.

Why is this relevant? Some scientists consider that O. rosmarus can be subdivided into Pacific, Atlantic and the poorly-known Laptev Sea populations. There are some genetic differences between the first two populations, which suggest a degree of isolation over a reasonably long period. The Laptev population has not yet been adequately characterized genetically, and some authorities do not regard it as sufficiently distinct to warrant a separate designation. It would be interesting to know whether the ivory of the Laptev and Atlantic populations can be distinguished by analysing ancient DNA. (Similar techniques have been used to distinguish North American and Eurasian mammoth populations.) A DNA match to the existing Laptev walrus population – whose range includes the Kola peninsula[in north-western Russia] – might suggest that Scandinavia was the source. On the other hand, if Iceland was the source, any genetic signature recovered from the chessmen should closely conform to that of Atlantic walruses. Thus science may inform art, and vice versa.

This might inform where the ivory was harvested but given the extent of Viking trade, including clearly the provision of walrus ivory (and indeed unicorn horn, aka narwhal tusk) to Western Europe, it would not preclude Icelandic or Western Arctic walrus tusk being worked by a craftsman in Norway, or elsewhere.  It does seem unlikely that ivory harvested in Scandinavia would be traded back to the walrus-rich Viking colonies, walrus to Iceland being as coals to Newcastle, so a European source for the tusk would at least argue against an Icelandic workshop.

However, Graeme Davis, in his comprehensive study Vikings in America (Birlinn 2009), dismisses the idea that walrus ivory could have, in Viking times, come from anywhere other than Baffin Bay, and proposes a new theory on the origin of the Chessmen:

Trade between Greenland and Scotland is magnificently exemplified by the Lewis Chessmen, now acclaimed as one of the greatest treasures of the United Kingdom…The Chessmen are almost all made from walrus ivory, with the remainder being carved from whale tooth. The walrus ivory must be from Greenland. The walrus has a distribution which is circumpolar, living predominantly at the edge of the ice pack and moving north in summer and south in winter as the ice-edge moves. In Europe walrus are found only in Spitsbergen and along the edge of the Arctic Ocean ice. In these areas they were unmolested by man in Viking times as the area was too remote. Populations accessible to hunters are found in Greenland, both north-east and north-west coasts, and in the Arctic archipelago. The walrus ivory of the Lewis Chessmen was either harvested in Greenland or transported via the Greenland colonies. In artistic style the chessmen cannot be precisely attributed to any area; indeed, they are artistically unique. Both Trondheim and Dublin are among the places suggest ed for their production, though without any real evidence for either. The scenario most writers envisage is that the ivory was exported from Greenland to either Norway or Ireland, carved there, then somehow found its way to a west-facing beach on Lewis – a location that in European terms is on the way to nowhere. A far simpler explanation is that the walrus ivory was taken from a Baffin Bay hunting ground to the Greenland settlements, carved there, then brought to Scotland as a luxury good for trade. Uig on Lewis is more or less the closest Scottish landfall to Greenland, and precisely where a ship from Greenland might reasonably have landed. The simplest explanation for the unique style of the Lewis Chessmen and the location of the find is that they are a product of Viking Greenland. Quite how this might be tested is unclear. Perhaps they should be regarded not just as a treasure of Britain, but also as a treasure of Greenland.

The remote island of Rona, 44 miles off the Butt of Lewis, was evidently used in Viking times as a significant direction indicator, particularly, the author suggests, by Viking sailors heading to or from Greenland. If a ship bearing east towards Norway –

passed to the north of Rona, it might make landfall on Orkney, the Fair Isle of Shetland; if it missed to the south the landfall might be Scotland’s north coast around Cape Wrath, or the west coast of Lewis – specifically Lewis, where the Chessmen were found.

Vikings in America is a very thorough and engaging examination of Viking exploration to the West and settlement in Greenland, the Arctic and mainland North America, and provides further detail to support this (and other) theories – highly recommended.