Seonnaidh Gorabhaig, John Maclean, was born in Ungeshader in 1888.  He was unmarried and remained in the family home at No. 3 with his brother Peter (the Coll) and latterly Peter’s wife Effie (Oighrig Mhorgain from Bragar).  The two brothers built Taigh na Coll themselves in the 1930s, carrying the stone in from half a mile away.

Seonnaidh served in the Royal Naval Reserve and was called up in 1914 to join the First Naval Brigade. He was posted to Antwerp and was taken prisoner, a brutal experience that affected him badly. DJ Macleod, Enaclete and Aberdeen, recounts the following: 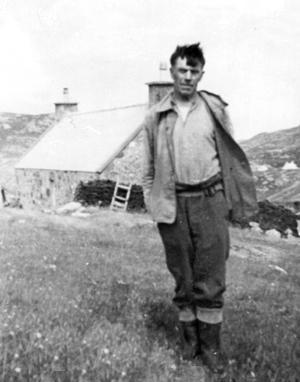 “The Germans transferred these prisoners to the Eastern Front where they were in the front line trenches serving the German soldiers fighting the Russians. They had a hard time. Seonnaidh was amongst the British prisoners captured by the Russians along with the Germans. They were brutally treated by the Russians and many of them died from starvation, slave labour and maltreatment. I cannot remember if Seonnaidh worked in the salt mines – he certainly was treated worse than a slave. He survived but it left its mark.

He would go two or three days without shaving; sometimes he would appear shy as if he had a complex. He used to walk over the hill to Enaclete for a ceilidh some evenings – ceilidhs were common after work in these days – and used to go usually to Finlay MacLeod’s (2 Enaclete) and Donald MacLeod’s (3 Enaclete). Once during WW2 in one of the houses they were discussing the brutality of the Germans and Seonnaidh said, “Wait till they meet the Russians.” This was one of the few times he mentioned the war – he would not discuss his experiences.

Seonnaidh worked like a trojan, and slaved day and night and in all weathers on the croft. Some of those who suffered brutality in the war were like this; they would work like horses. In retrospect I think it acted like some kind of therapy for them. People sometimes mocked Seonnaidh’s behaviour and his being unshaven, but he was not like this before he joined the Navy. It’s amazing how war can change a person.”

He outlived Peter and Effie and was still keeping a cow on the croft in his 80s, cultivating entirely by hand.  There’s another picture here.