A welcome finish to the AGM was an illustrated talk on “The Lighter Side of Gaelic Medicine” by Mary Beith, an authority on traditional Highland medicine and writer of the Deanamh a’Leighis column in the West Highland Free Press. Strangely it was Mary’s first visit to Uig but she found it a rich source of new information and will be looking at several Uig cures in forthcoming columns. Swans, carbolic soap and archangel tar will feature.

Meanwhile, she writes this on a local veterinary practice:

“To me, the most fascinating piece of information from Uig is about the tòc or tòchd, a word for which there appears to be no exact English equivalent in the relevant context. Dwelly tells us it refers to a disease in cattle, but does not specify the sickness. It may simply refer to a symptom. His dictionary gives the additional information that the 18th century Sutherland poet, Rob Donn, used tòc in connection with sheep.

Whatever the disease may be, the remedy is carried out in a very specific manner which was confirmed to me again and again by a variety of people. It is, or was, applied only as a last resort to a cow in desperate circumstances, often when the animal could barely stagger or even stand. 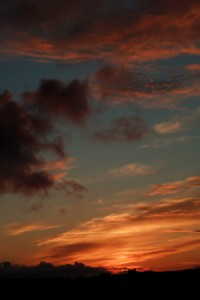 Five or so strong men would hold the beast down, while someone very skilled in treating the tòchd, and not just anyone, would take a sterilised sewing needle bearing a strong piece of thread. The needle was inserted into the lower eyelid, which was then pulled down and away from the eye with the thread. A sharp blade was then used to carefully cut out the tòchd, described to me as a small, very hard ball in the flesh immediated under the eyeball.

In most cases, the animal recovered very quickly and was soon on its feet again. I learned from a copy of Father Allan Macdonald’s Gaelic Words from South Uist that tòchd was known in that island as a “disease in the eyes of cattle.” In Uist, though, the remedy was very different: tobacco spittle was applied.”

It is further reported in Uig that the vets had no truck with this cure, and that the disease is pink-eye.

The picture here has no relevance to the story but is typical of the fine nights we had in May and is perhaps better than a picture of the tòchd.

1 thought on “Mary Beith in Uig, and the tòchd”