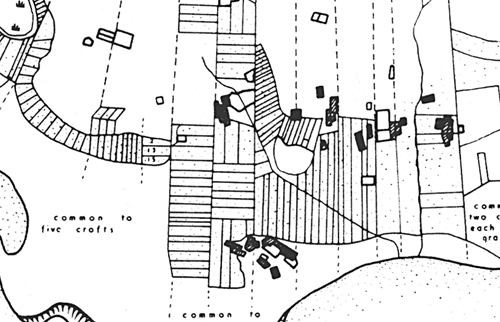 Click picture to enlarge (and again to zoom in). From Uig, A Hebridean Parish (1960).

In the period before the lotting of crofts the whole peninsula was occupied by some five clachans – Valtos, Cliff, Kneep, Uigen and Reef – some of which shared common pastures. During the early part of the nineteenth century and earlier, apparently, than the 1850 lotting carried out in most of Lewis, crofts were allotted in each of the clachan areas. Valtos and Cliff shared a common pasture and so became one township; similarly Kneep and Uigen were combined.

In Kneep it seems that the croft boundaries were not accepted by the crofters. Certain basic divisions between groups of crofts are discernible today, and within these basic divisions a certain regularity of distribution of strips persists, but the crofts at Kneep are still highly fragmented: the fifteen crofts comprise over 180 separate arable plots. With the prosperity of the fishing industry, the population of Valtos and Kneep rose rapidly at the end of the nineteenth century – from 467 in 1841 to 659 in 1891. Some, at least, of the subdivisions of Kneep date from this period.

Crofts 16-18 together with the Manse and two cottars are situated across the neck of the Glebe promontory [at Uigen], on the south side of the peninsula. The five legal crofts are today worked as three unites, fenced, reasonably compact and with holdings of exceptional size for the area – average 15.1 acres. Crofts 1-15 Kneep on the northern side of the peninsula adjoin those of Valtos. Here is a climax of land fragmentation, which imposes severe limits on croft efficiency. Twelve of the fifteen crofts are worked; of these only numbers 4 and 5 are compact homogenous crofts; numbers 3 and 6 are compact except that part of the land which lies within their boundaries belongs to croft no. 13. The remaining eight crofts comprise 108 separate plots of croftland and 52 separate plots on the common machair. On one croft with 2.8 acres arable, the average size of each piece is a mere 0.15 acres. The grazing land on the croft is divided into strips running across the slope, which are interchanged each year, whilst a large part of the common grazing lands are divided into interchangeable sections (“quarters”) to accommodate each of the groups of crofts. See the image above and this further detail.