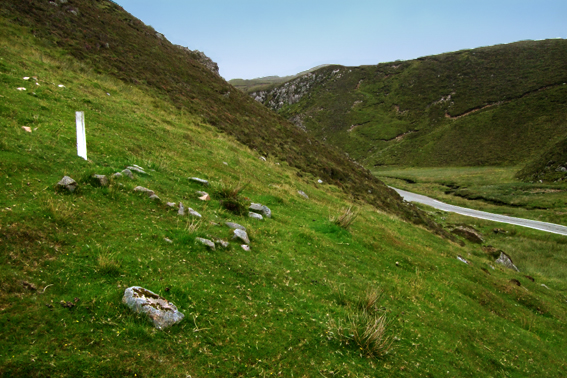 Travelling east down Glen Valtos from Timsgarry, just past the first quarry on the left, you can see the stones which spell out JD. Ahead on your right is the steep zig-zag path, which the Uig women descended with the creels of peat on their backs.

JD was James Drummond and this marks the spot where he used to pitch his tent. James Drummond was one of the travelling people who came to Uig in the summers of the late 1930s. Each summer they arrived with horse and cart, the cart piled with their possessions, the tools of their trade and lots of children.

The travelling people were tinsmiths producing basins, pails and mugs. They were ingenious craftsmen also making dumpling pails with a funnel up through the middle of it, which enabled the steam to cook the middle of the duff. The men worked around the campsite making the tin products and the women went around the doors selling their wares, getting loose tea, sugar and scones along with the payment of the goods.

In the evening the local young men would visit the tents as the piping tradition was strong amongst the travellers. James Drummond played the pipes and was exceptionally good on the melodeon. Great ceilidhs were remembered in Valtos Glen.

Some of the Uig community remember other encampments before 1939, at a big field at Ceann a’Chlachan at Loch Croistean (before the bungalow was built), at An Lag Ghlas in Carishader (close to where the skip is now), and at Gob an Droma at the north end of Enaclete. After the war the travellers settled in the one place on the outskirts of Stornoway and the tin goods came to Uig in vans and little lorries. The travelling people were selling the tinware and buying foidheagan, the woollen waste left when the tweed was removed from the loom, which was sold on and recycled.

Donald Smith who used to live in Ungeshader remembered James Drummond as a well liked character, popular with everyone. Donald bought his first gramophone second hand from James in the field at Ceann a Chlachan. James would demonstrate to the young boys how you could lift a wooden barrow above your head. The wooden barrows had an iron wheel and were what the men building the road used to transport large rocks. This barrow was very heavy and James Drummond had his own technique to lift it and shared this skill with the boys.

Each travelling encampment always had a fresh water source nearby and sure enough the spring where they got their fresh water is just behind “Aite nan Ceardain” in the Glen.