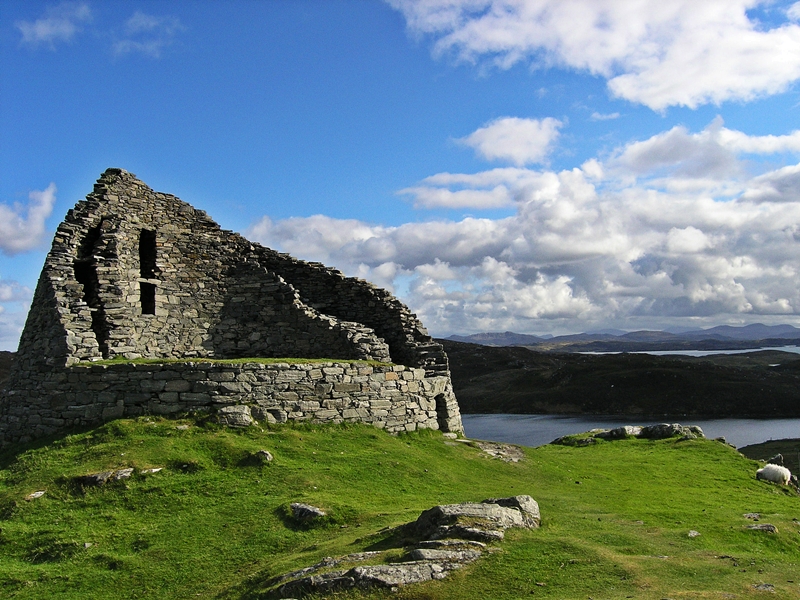 A tale from Donald Macdonald’s Tales and Traditions of the Lews:

Dòmhnall Càm and the big smith went one summer to the Flannan Isles, and the Morrisons of Ness, hearing the Macaulays were from home, came and drove the cows from the moor, for they met with no opposition.  When Dòmhnall and his party returned the womenfolk told them what had happened, and they set off in their boats direct across the mouth of Loch Roag so as to intercept them, as they would be slow with their spoint.

When they got to the opposite shore they sent out parties to reconnoitre, and it was reported that the cows were grazing at the loch not far from Dun Carloway, so they knew that the Morrisons were resting in this strong fortress.  The Macaulays rested themselves by the shore for the night, and in the morning, as they were weak from want of food, Dòmhnall Cam and the big smith crept carefully forward, on their guard lest they alarm the Morrisons.  When they came near the Dun they saw a large cauldron over a huge fire with the whole carcase of one of the plundered cows in it, and a man lying asleep near the fire.  The big smith held and silenced the sleeper, while Dòmhnall Càm drew the meat out of the cauldron, then the smith threw him into the boiling liquid.  The smith then rolled the boiled beef in his plaid and carried it to the starving company, while Dòmhnall Càm went to the Dun and surprised and stabbed the sentry on guard at the door.

The Macaulays then came up and the big smith was set to guard the door and prevent anyone escaping, while Dòmhnall Càm by means of two dirks, which he stuck at different levels into the walls of the Dun, managed to climbe to the top of the structure, which was open.  Dòmhnall Càm’s men gathered bundles of heather which were handed up, set alight and thrown down into the Dun, and this was repreated until all the inmates were smothered or burnt.  So died all the Morrisons of the raid on Uig, and Dòmhnall Càm and his men destroyed most of the fabric of Dùn Carloway, which was said to have been built in the fourth century by Darg Mac Nu-Aran (brother of Cuoch.)