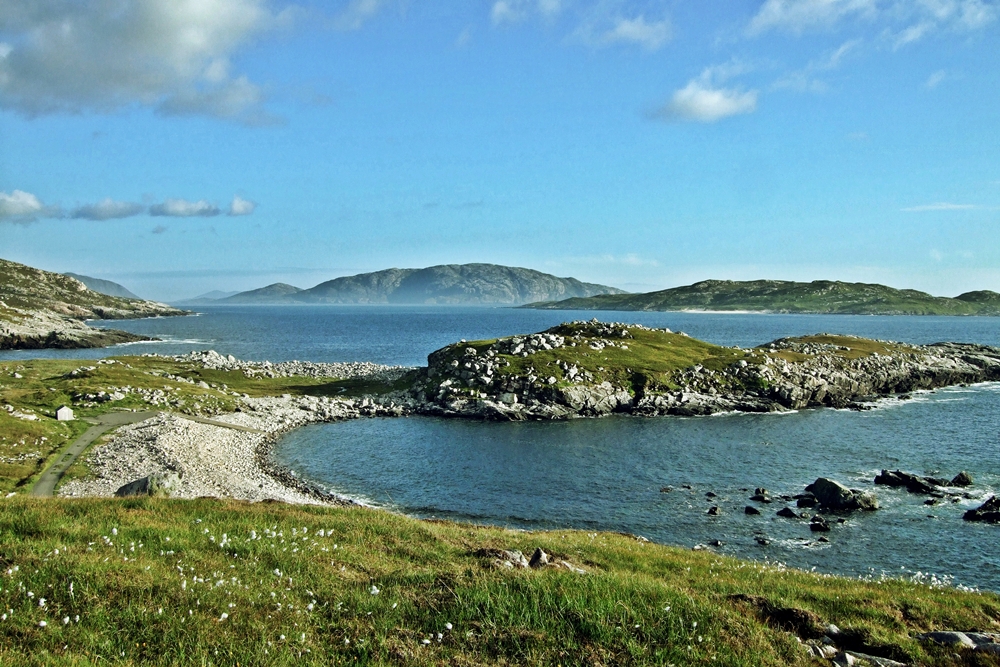 Mealista Island (on the right) from above Molinish, with Scarp in the distance.

There is a little island called Mealista, separated by a narrow seaway from the coast of Uig, without any permanent population, but to which, in former times, people resorted for the two or three summer months, to look after cows which they transported to it for the sake of pasturage.  Tradition says of this island that no one was every born on it who was not from birth insane, or who did not become so before death.  In the last generation, three persons had the misfortune for the first time to see the light of day on this unlucky spot, and all three were mad.¹  Of one of them, who is remembered by the name of Wild Murdoch, many strange stories are told.  It is said that his friends used to tie a rope around his body, make it fast to the stern of the boat, and then pull out to sea, taking the wretched man in tow.²

The story goes that he was so buoyant that he could not sink; that they “tried to press him down in the water”; that he could swim with a stone fastened to him; that when carried to the rocky holms of Mealista or Grianan, round which the open Atlantic surges, and left there alone, he took to the water, and swam ashore; and that, when bound hand and foot and left in a kiln, by a miracle of strength he broke his bonds and escaped.  It was thus they are said to have treated him during his fits of maniacal excitement; and there are many still alive [in 1862] who saw it all, and gave a helping hand.

Not single was this poor man’s misfortune.  To his insanity was added the calamity of living among an unenlightned people, a thousand years removed from the kindly doctrines of the good Pinel [a French doctor of psychiatry].  The further story of Wild Murdoch will astonish no one.  He murdered his sister, was taken south, and died in an asylum; or, as the people say and believe, in the cell of a gloomy prison, under which the sea wave came and went.

I am not detailing here what happened in the Middle Ages.  It is of the nineteenth century – of what living men saw – that I write.  The belief that all born on Mealista are or will be insane, has probably originated in two or three successive births on the island being thus unfortunate.

Notes (from A Mitchell):1. This was asserted to me over and over again, but I think it improbably that this small island was the birthplace of all the three.  2. A Lewis gentlemen, who read this paper in manuscript, here adds: “The reason for towing Wild Murdoch was, because it would not have been safe to have had him in the boat.  This was told to me by one of his relatives.”