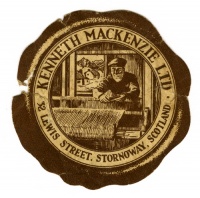 The Congested Districts Board established a Lewis committee, and this is their 1900 report on the state of, and proposed improvements to, the tweed industry. Note a couple of references to Uig, which was obviously considered particularly ‘deserving’.

The Congested Districts Board was established by the Congested Districts (Scotland) Act of 1897 to improve industries and infrastructure in the crofting counties which suffering from overpopulation and poverty. Their method was principally the provision of direct grants, specialists and facilities in response to particular local need, and their approach was often openly experimental. The Committee operated for 14 years, from 1898 to 1913, produced an annual report summarising local and district developments.

Lewis was considered a particularly difficult area and a district committee was established. This is their report, in 1900, on the state of, and proposed improvements to, the tweed industry. Note a couple of references to Uig, which was obviously considered particularly ‘deserving’.

Report by the Local Committee on Scottish Home Industries (Tweed Industry) in Lewis and Harris to the right Honourable Lord Balfour of Burleigh, Secretary for Scotland.

My Lord, – In April 1899, under your Lordship’s sanction, Mr Angus Pirie, Rogart, Sutherlandshire, was appointed for a period of two months, to inspect and report upon the present condition of the home-made tweed industry in Lewis and Harris, and to give instructions and advice to the workers with a view to improving the carding, spinning, dyeing, warping, and weaving of home-made tweeds.

Mr Pirie entered upon his duties on 1st May, and submitted a written report on his two months’ work, of date 20th July 1899. During May and June he visited almost all the districts in Lewis and several of the districts in Harris in which tweeds are made. He found many defects in the various processes of the manufacture among the Crofters in both Lewis and Harris, as well as in the primitive looms in use, and embraced every opportunity available to him in the short time at his disposal in conveying to the workers instruction for improving the quality of their tweeds. The people, as a rule, were accessible, and glad to receive instruction and advice, although in some cases the Instructor found, on a second visit, that the workers reverted to their own more antiquated system, because less troublesome than the methods advised. These remarks apply to all the branches connected with the process of manufacture.

In the districts visited by the Instructor in Lewis in which tweeds are made for the market he found 76 hand-looms, of which 11 are worked with the ‘fly shuttle’ and 65 are primitive. They are not all constantly employed, but as one loom can weave all the yarn that can be supplied by several carders and spinners, this shows that a considerable number of the Crofter families are engaged in the industry. Besides these there are several townships where the cloth is made, but for family or local use only, and not as a commercial commodity. It may be remarked, however, that the bulk of the tween in Lewis is produced from October to April, as during the summer and autumn months the people, women as well as men, are chiefly employed on their crofts, and at herring fishing in Stornoway and on the east coast. Thus comparatively few are wholly dependent on the tweed industry for their subsistence in Lewis.

The limited time at Mr Pirie’s disposal only permitted him to visit a few of the townships in Harris, and thus he was unable to ascertain the number of looms in use. But he reported that a large number of families in almost every township are engaged in the industry, and a much larger proportion that in Lewis depend upon it as a means of livelihood. He also reported that, as a general rule, the quality of the work in Harris is superior to the average work in Lewis, although in a few of the lewis districts, particularly in Uig, the product is similar in style and quality to that of Harris.

The present Instructor, Mr Alexander Lamont, entered upon his duties on 1st August, under a twelve months’ engagement. He is a native of Skye, has been engaged in the tweed manufacture since his boyhood, and knows all the details of the work from the wool to the finished cloth, both in hand-loom and mill work. He had been employed for over eight years in the Lochbroom Tweed Mills prior to his appointment here.

With the exception of one month, when, by special arrangement, he was engaged in the Parish or Rogart, Sutherland, in giving a course of lessons in dyeing to the tween-makers in that district, he has itinerated throughout Lewis and Harris, giving instruction and advice to teh Crofters on the lines already laid down. He has been able to pay several visits to all the townships in the wide area over which this industry is carried on, and in many cases he has travelled over long distances to districts in which his personal presence was specially desired by workers who wanted further information and advice in effecting improvements suggested by him on a previous visit.

Mr Lamont’s experience of the workers and their work coincides generally with that of Mr Pirie, as already indicated. But as he has more time than the latter had as his disposal, and is able to make several visits to the same workers, he finds that the prejudices against suggested improvements which one or two visits were unable to overcome are being gradually removed by more frequent intercourse. The process of improvement, however, is slow, but not hopeless. In some districts it has made marked progress.

Two efforts have just been adopted as an experiment for further practical instruction. First – The Instructor has got the use of a Witch-loom, kindly lent to the Committee by the Scottish Home Industries Association from its depot in Harris. This loom has been set up in Stornoway for the purpose of producing improved patters and textures of tweeds, and giving lessons in the work to such as will avail themselves of this opportunity. Second – Two dye-boilers of 30 gallons capacity each have been sent to the District of Uig to enable the workers to dye a sufficient quantity of wool and yarn for a large web at one time, thus alienating the work of the irregular shades produced when the dyeing was done in successive baths in the smaller pots at present in use.

It is hoped that these experiments will be appreciated, and that it may be found useful by-and-bye to supply similar dye-boilers to other deserving districts. It is further hoped that, as a result of the Instructors’ work and supervision, teh quality of work will so improve as to justify the sending of specimens from the better class of workers in Lewis and Harris to the Industrial Exhibition to be held in Glasgow in 1901.

Both Mr Pirie and Mr Lamont remark on the process of hand-carding as handicapping the industry both as regards output and quality. The Committee are more anxious on this point, as it affects the quality and finish of the tweed produced, which they desire to see equal to any in the market. Mr Lamont reports that at present many of th workers send their wool to the south and east of Scotland, and others on the mainland, not only to be carded but to be spun, adn that thus the distinctive character of what is known as ‘Harris Tweed; is apt to be changed and to deteriorate. A carding mill is about finished by Sir Samuel Scott at Tarbert, Harris, and if a similar mill, with washing machinery, were erected in or near Stornoway for Lewis, the temptation to have the wool also mill spun would be greatly reduced, if not entirely removed.

The Committee are well satisfied with the present Instructor, who is very attentive to his duties, in which he takes great interest. He is a capable bicyclist, without which it would be impossible for him to visit the scattered districts of the Island except at longer intervals than would be desirable.

Consider the extensive area over which he has to travel he is unable to repeat his visits to the various localities as frequently as the Committee would desire, and also looking to the slowness of the process in effecting the desired improvements in the industry, they would respectfully suggest that he should be reappointed for another year.

We have honour to be,

Your Lordship’s most obedient Servants,

On behalf of the Local Committee,