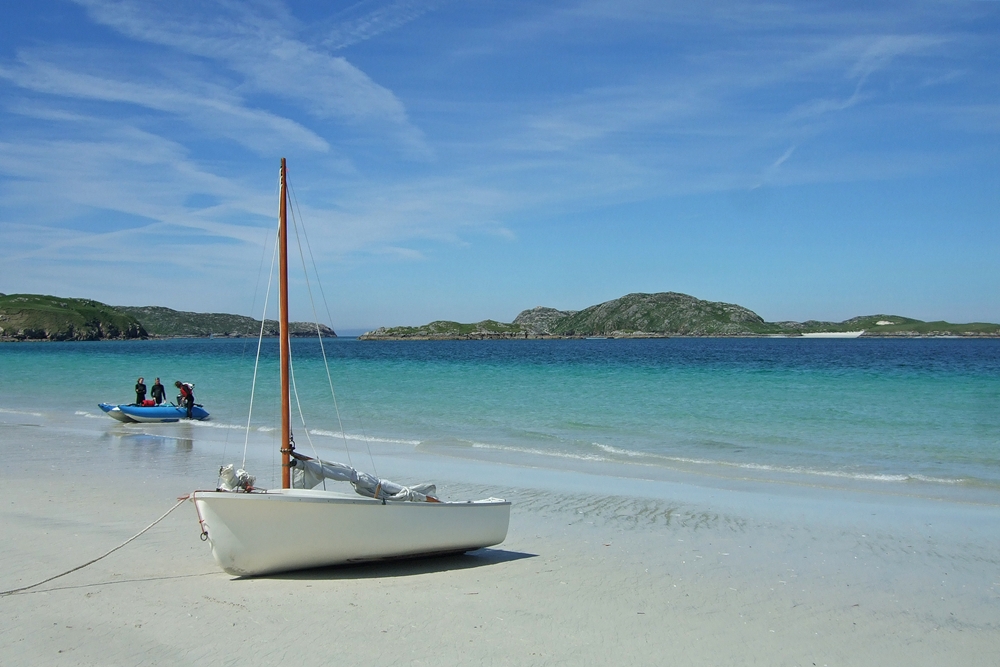 From Donald Macdonald, Tales and Traditions of the Lews:

Around 1840 there were four families living on Pabbay, and prominent among them was one of the old soldiers of Uig, the Sergeant Mòr, a son of Tormod Mòr Maciver of Beirghe (Reef). These old soldiers used to be given a small sum to act as coast watchers, etc, to the customs authorities of the day.

It seems a ship put into the shelter of Pabbay, and the sailors, on coming ashore, disclosed to the islanders that she was loaded up with whisky and that the captain was doing a roaring trade in this smuggled whisky.

After the ship set sail the members of the boat’s crew of Pabbay saw that she was becalme in the sound of Bernera, and they set off in pursuit armed, and the seannachie says the sergeant shot the captain through the head.  We are not told what they did to the others aboard, or to the ship’s cargo of whisky, but we can understand that they did not pour it all into the sea.

A good many months afterwards the rumour reached Uig that the relatives of the dead captain were coming to wreak vengeance on the dwellers in Pabbay.  A panic set up in the island, and they hurriedly gathered all their worldly possessions and made for the mainland where they got pieces of land from the Valtos people.  One woman, whom the story-teller knew when he was a boy in Valtos, was only one year old when she left Pabbay and was known by her contemporaries as Bliadhnach Phabaigh – she was a sister of Mairi Dhall, the authoress of the song “Och nan och tha mi fo mhulad.”

We are not told whether the ship ever came seeking revenge upon the Pabbay crew led by the Sergeant Mor, whose ruined house wall is still pointed out on Pabbay by the Valtos people, who now use this lush island as winter grazing for their stock.

2 thoughts on “The Sergeant Mòr of Pabbay”