In 1909 the United Free Church congregation was worshipping in the old leaking Free Church. Work began on a new building in 1913 and they endured a summer of outdoor worship before the new church was opened. 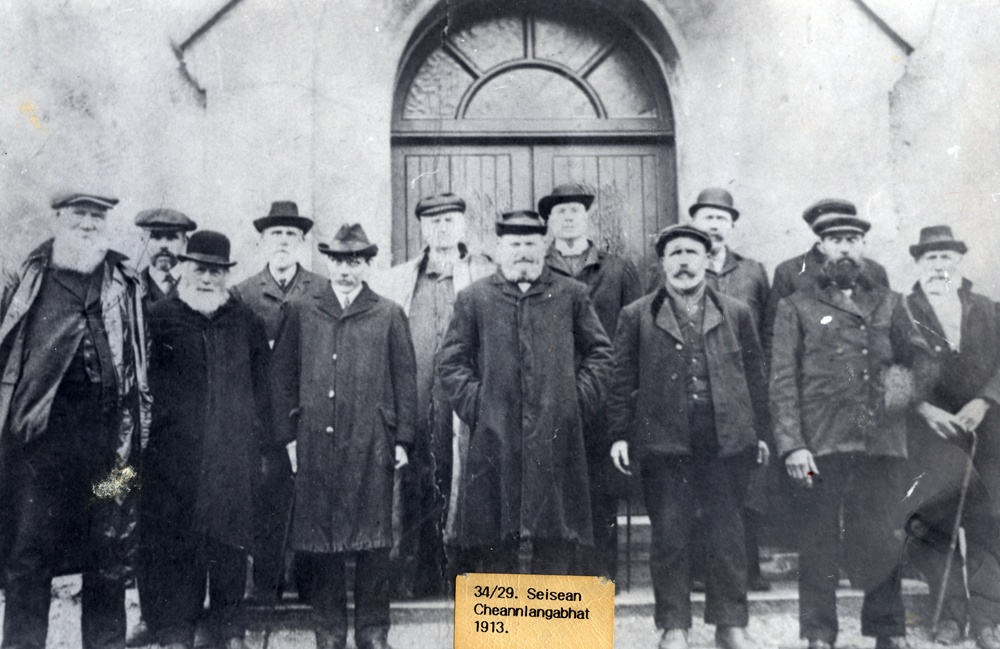 Virtually the whole of the congregation of Uig had joined the Free Church at the Disruption in 1843, which necessitated the building of the large, new but fairly rudimentary church on reclaimed land at Ceann Langabhat – completed in 1846, at which point, according to local tradition, a watch was kept over it at night for fear that “the other ones” would set it alight.

There was further disquiet within the congregation over the next decades. In 1875, after the repeal of the Patronage Act, the larger proportion of the Free Church congregation rejoined the Established Church at Baile na Cille, with Angus Maciver, son of the Catechist, as their minister. The rest continued at the Free Church, and most of these united with the United Presbyterian Church to form the United Free Church in 1900. They were still worshipping in the old Free Church building at Ceann Langabhat (Miavaig), and by 1909 the state of both the manse and the church were causing concern. From the minutes of the Deacon’s Court in that year:

This church was built in 1843 and like many other buildings put up hurriedly at that period, it was meant to meet the requirements of the time. It was a double roofed building with low walls and left without flooring or lining to the walls. the roof has been for many years threatening to give way and when the weather is wet water finds its way in many parts through the roof to the great discomfort of the worshippers. but for the church crisis the work of repair and renovation would have been undertaken long ago and it is now necessary to undertake the work without delay.

The Church was seated for a thousand people but since the Parish has decreased considerably in population, and with all the secessions taking place since 1843, a church to accommodate six hundred would be quite ample.

It would in the opinion of the office-bearers be more expensive and less satisfactory to repair the present church than to build a new one. The proposal is to take down two sides of the present and rebuild on a smaller area, and heighten the walls using the material at hand as far as possible. The membership of the congregation is 161, and the number of adherents is over 400.

It took four years for the project to come to fruition; by that point the congregation stood at 169 members, 7 elders and 12 deacons, with 169 pupils attending four Sunday schools. The work on the church began at midsummer. The Highland News carried the reports. 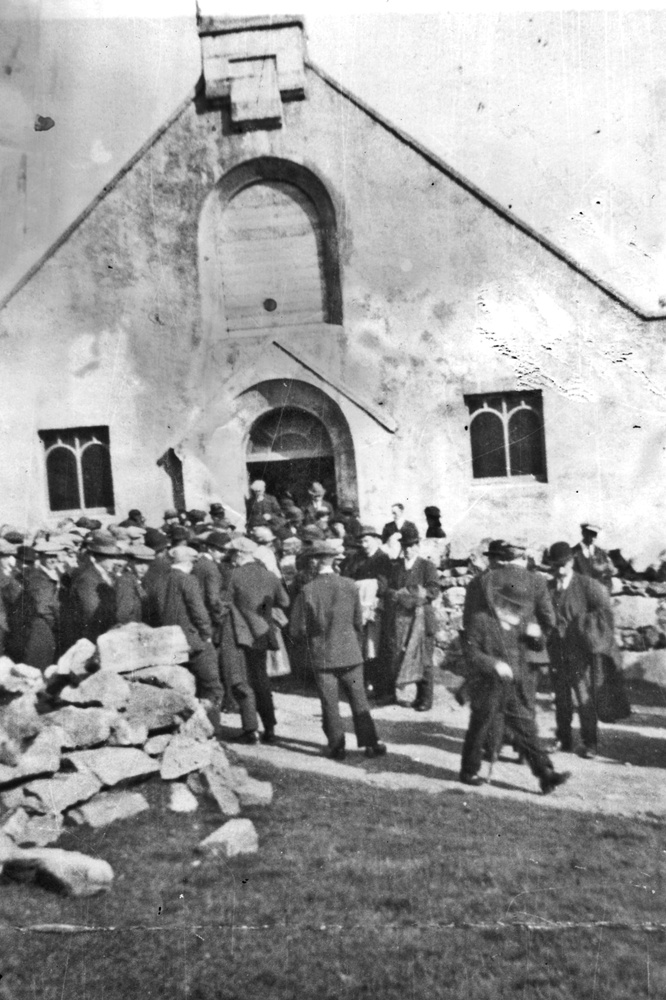 The Sacrament of the Lord’s Supper was dispensed in the United Free Church congregation of Uig last Sabbath. The Minister of the congregation, Reverend James Maciver, was assisted by the Reverends AJ Morrison, Portree, and R Morrison, Stornoway. The communion services began on Thursday and ended on Monday. Most of the services were conducted in the open air in a beautiful sheltered spot in Valtos Glen – an ideal place for a communion if the weather is favourable. Sunday however turned out to be an exceedingly wet and boisterous day, and it was found impossible to worship in the Glen.

The congregation being without a place of worship, a new church being in course of erection on the site of the old one, they were generously accommodated on the site of the old one, [the] Established Church, by the favour of the minister, the Reverend Allan Mackenzie. It is a sign of the times and a foreshadowing of coming events when office-bearers of United Free and Established partook together of the Sacred Symbols. The congregation of Uig had an eventful and stormy history, and during the turbulent period 20 or 30 years ago not even the most sanguine could have imagined that in the year of grace 1913 such a scene could be witness as took place on Sunday last. But we are moving forward and surely it is to better things. The ministers of both congregations one to be congratulated on the goodwill shown both by them and [by] their congregations on this occasion.

The new United Free Church at Uig was opened on Thursday by the Reverend Peter Macdonald, West Church, Glasgow. There was a large congregation, and the whole service was hearty and encouraging. A number of the ministers of the Presbytery were present, and the Reverend Allan Mackenzie, Established Church, was also on the platform. After an appropriate sermon from Isaiah 62, verses 6 and 7¹, Mr Macdonald in a few words declared the church open.

George Macleod, Garrabost, clerk of the Presbytery, made some remarks, as also did Reverend Allan Mackenzie. Mr MacNiven, the minister of the congregation, voiced the thanks of the congregation first of all to Dr Macgregor and Mr Lee to whose kind efforts the congregation are indebted for the new church, then to the various contractors who did the work entrusted to them so well, to Reverend Peter Macdonald for coming to open the church, and to all the other friends who with their means and with their presence encouraged the congregation at this new stage of their history. The church is a handsome building and most suitable to the requirements of the congregation.

The church did indeed absorb the back wall of the old building, which was seen again during later renovations. As foretold above, the United Free joined with the Established Church to form the Church of Scotland in 1929; there were two Church of Scotland congregations in Uig until they merged into a single charge in 1979.

John Macleod’s History of the Church in Uig (available to consult at the museum and in Stornoway Library) gives more detail on the secessions.

¹Isaiah 62: 6. I have set watchmen upon thy walls, O Jerusalem, which shall never hold their peace day nor night: ye that make mention of the Lord, keep not silence 7. And give him no rest, till he establish, and till he make Jerusalem a praise in the earth.