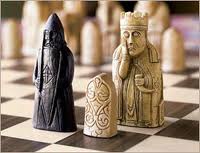 Six Lewis Chessmen from the collections of National Museums Scotland and the British Museum are to go on display for a short time at Uig Museum on Tuesday 13 September. All welcome, admission free.

Six Lewis Chessmen from the collections of National MuseumsScotlandand the BritishMuseumare to go on display for a short time at UigMuseumon Tuesday 13 September.

A knight, pawn, warder, king, queen and bishop will be on display from 11.30am-4pm at UigMuseum, to mark the end of a major touring exhibition on the chess pieces at Museum nan Eilean, Stornoway. The Lewis Chessmen were reputedly found in a sandbank in the Parish of Uig in the 17th century.

David Caldwell, Keeper of Scotland and Europe,National MuseumsScotlandand James Robinson, Curator, Department of Prehistory and Europe, British Museum will be on hand atUigMuseumto discuss the chessmen and answer queries from visitors.

Baile na Cille Church in Uig, now in private ownership, will also be open to visitors from 11am-4pm on 13th September for Doors Open Day. The church was opened in 1829, two years before the chessmen were found, and the then minister, Alexander Macleod, was reportedly involved in their sale.

The short display will mark the end of the hugely successful touring exhibition The Lewis Chessmen: Unmasked, which has so far attracted over 119,000 visitors. It was shown at the National Museum of Scotland, Edinburgh;AberdeenArtGallery and Shetland Museum & Archives and is at Museum nan Eilean, Stornoway until 12 September. The exhibition has attracted over 20,000 visitors in five months in Stornoway and a day of storytelling, music and poetry will be held at Museum nan Eilean on 12September to mark the last day.

“The last time there was an exhibition on the chessmen in Stornoway in 1995, we took some to Uig for the day, and we’re delighted to do so again. It’s an opportunity for local people to come and see the chessmen near their reputed findspot and I also recently suggested that they could have been found further along the coast, at Mèalasta, so it will be a chance to discuss the idea with them.”

““We have been delighted by the success of the visit of the chessmen to Stornoway, with twice as many people coming to see them as last time they visited. This final step on their journey, to Uig, is a particularly important and exciting one.”

‘We’re always delighted on the special occasions when the chessmen come home.  We’re hoping that the whole community will turn out to see them, as happened last time they were in Uig, and we have a few special events planned to mark the day. The finding of the collection is still fresh in local tradition, and we follow the research and speculation about their origins with interest. Our hope is that more interest will be given to their finding in Uig, and that that may lead to a better understanding of the Viking community here.’

National Museums Scotland has signed a partnership agreement with Museum nan Eilean for a further five years, to look at future loans, staff mentoring, peer support, and possibilities for joint projects to highlight the rich collections of both organisations. The British Museum has agreed to support the redevelopment of Lews Castle and to work with Museum nan Eilean over the same period.

The Lewis Chessmen were discovered on the western shore of the Isle of Lewis in 1831, as part of a hoard of walrus ivory. The hoard includes assembled pieces made of walrus ivory from at least four chess-sets, probably made in Norwayin the late 12th or early 13th century. As the largest and finest group of early chessmen to survive, they are one of the most significant archaeological discoveries ever made inScotland and are of major international importance. Few chessmen survive at all from the Middle Ages, and these are unparalleled in their high-quality, humour and intricacy of design.

The majority of chess pieces were acquired by the British Museumin 1831, in order to preserve the hoard as intact as possible in a public collection. They have been on permanent display ever since. Eleven pieces remained inScotlandand have been on display for many years – the last ten in a prime position in the National Museum of Scotland.

3 thoughts on “The Chessmen: Home for a Day”