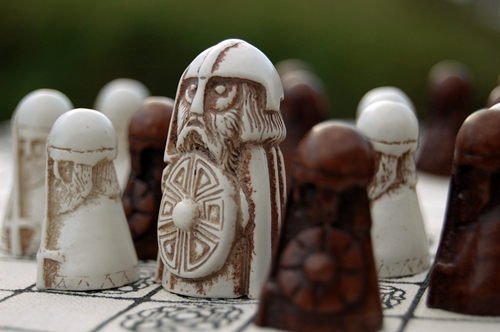 Hnefatafl, or the King’s Table, was played in Northern Europe in the Dark Ages, and popular in Viking lands from about 400AD.  Different versions were developed and sets and boards have been found from Ireland to the Ukraine.  We’re not aware of any proof that it was played in Uig, but it seems inevitable that when the Vikings started settling here from about 800AD, they would have brought the pastime with them.  With the hoard of Uig Chessmen found in the dunes by Traigh Uig, there were (at least) fourteen plain round gaming pieces of the type used for games like hnefatafl and tabula.

Hnefatafl sets are now for sale at Uig Museum (with pieces in the style of our chessmen and a linen board).  In the past some sets were made of carved wood, ivory, jet, glass, bone or antler, but many were much plainer in style as the game was played by all classes, so you could assemble a set from different coloured shells:  one large one for the king, 12 light coloured shells for his defenders, and 24 dark shells for the attacking forces.  A board of 11 x 11 squares can be made of wood or slate.  We have a slate-and-shell set in our longhouse display in the museum. 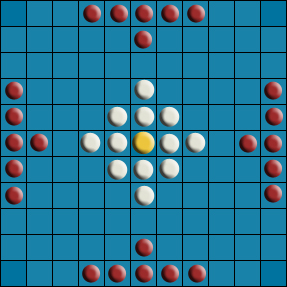 The rules for Hnefatafl vary, but the following is supposed to be how it was played in the 10th or 11th century.

1.  Set out the pieces as to the left, with king in the middle surrounded by his 12 defenders, and the 24 attackers round the edges.  Note the four corners are also the king’s squares and no other piece may occupy these or the centre square, though they may pass through the centre.  One player controls the king and his forces, and the other the attackers.  All players move the same way as the rook in chess: in a straight line horizontally or vertically (not diagonally) for as many squares as are free.  You cannot jump over another piece.

3.  In the course of play either side may capture and remove an opponent’s piece by ‘sandwiching’ it between two pieces, left and right or above or below, or between a corner square and an opposing piece.  The king cannot be taken by ‘sandwiching’ as he requires four to box him in; however he can move like any other piece and take a part in capturing his opponent’s pieces.  A piece may ‘sandwich’ himself between opposing pieces without being captured; if a piece moves in such a way as to sandwich two opponents, both are captured.

4.  The attackers move first.  Hnefatafl is a game of attack and defence, and either side may play aggressively or defensively.

You can also play online, and see other versions, on Aage Nielsen’s website.  The computer thrashes all opponents, however – better to find a human to play with.