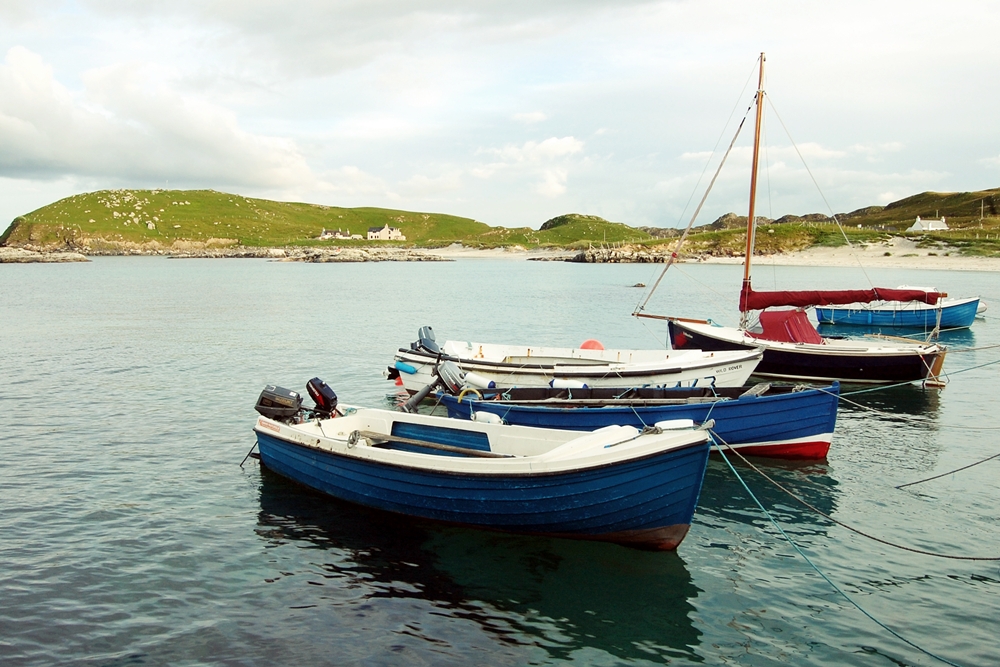 From Donald Macdonald’s Tales and Traditions of the Lews:

One of the best warriors of the parish of Uig was the Gobha Bàn, the fair smith, who lived at Kneep while Donald Càm was settled at Valtos.  The Gobha Bàn was stronger than Donald Càm but was not as clever with the sword.  The smith had a cess of grain from the parish, and when a cow was killed for domestic use the smith had a right to the head; but Donald Càm had neglected to pay his dues for seven years.

It happened that horse belonging to Donald Càm fell over a cliff and was killed.  Donald Càm had the head skinned and sent to the Gobha Bàn.  The smith saw that it was the head of a horse and ordered it to be preserved and dried.  Not long after Donald Càm sent his servants to the smiddy to get various iron tools mended, but the smith put all the irons together into the fire and made them into one lump.  He then told the servants to take the mass of iron back to their master and to tell him that he would not do a stroke of work for him until the seven years’ dues owing were paid.

The Gobha Bàn knew that Donald Càm would be angry and as he was no match for him with the sword, he took the precaution to heat red hot six feet of iron bar.  As he expected Donald Càm was soon seen coming fully armed and displeased, on which the Gobha Bàn came out of the smiddy with the long hot iron bar and drove Donald Càm back home in a great rage.  Some say he attacked the smith, who blinded him in one eye, hence the nickname ‘Càm’.  The Gobha Bàn’s smiddy was on the shore below where the Rev Malcolm Maclennan built the house [now 11 Kneep, on the left in the photo].  The children used to dig up pieces of iron within the ruined tobht that used to be there.

Donald Càm came next day and promised to pay the dues outstanding so long and they became friends once again, and the Gobha Bàn invited Donald to dinner next day.  He ordered beef and mutton to be cooked, but also the horse head in a separate pot.  Donald said he would like some of the cow’s head and he was handed the dish and ate a big feed of it.  When the Gobha asked Donald how he liked the head, he said it was extra good.  The Gobha then told him that it was no cow’s head but the horse head he himself had sent him.  Donla dcam was very angry and got up, and it was a long time before they were friends again.  For all that, when there was any emergency the Gobha Bàn was sent for by Donald to be near himself in a fray.