Further to the Daily Express cartoon about the alien cause of the disappearing loch at Morsgail, here’s a summary of the international coverage, from the Stornoway Gazette, 29 Dec 1959.

Few events in Lewis in recent years have aroused such worldwide interest as the “Morsgail Meteorite”. In addition to the planeload of British reporters, the Columbia Broadcasting system of America sent a team of cameramen to Uig to photograph the ‘hole’ for American TV, and we have received a cutting from the Bulaweyo Chronicle, which shows that Africa was equally interested.

From this Daily Express aerial photograph it can be seen that most of the damage was caused by water escaping from the upper loch, which was completely drained into the lower loch, about a quarter of a mile away and some fifty feet below.

But, even if we accept that most of the damage was caused by water, we have still to explain what set the water in motion in the first place. Three explanations have been offered.

The original one was that a meteorite had fallen, but it is difficult to sustain that in view of the fact that there is no well-defined crater – although a small meteor could have disappeared into the peat like a spoon of porridge.

The experts’ theory is that heavy rain was the sole cause. We certainly had heavy rain about the time of the incident, but it was not abnormal, and we have heard no reports of flood damage elsewhere in Uig, or even elsewhere elsewhere along the same watercourse as that from which the loch disappeared.

Again the ‘water only’ theory does not explain the smell of burning detected by the first witnesses, nor does it account for the fact that some small blocks of peat were thrown up on the bank rather higher than one would have expected if water were the sole cause.

The third explanation is that a flash of lightning caused a disturbance at the end of the upper loch, broke or weakened the bank, and set the water moving. 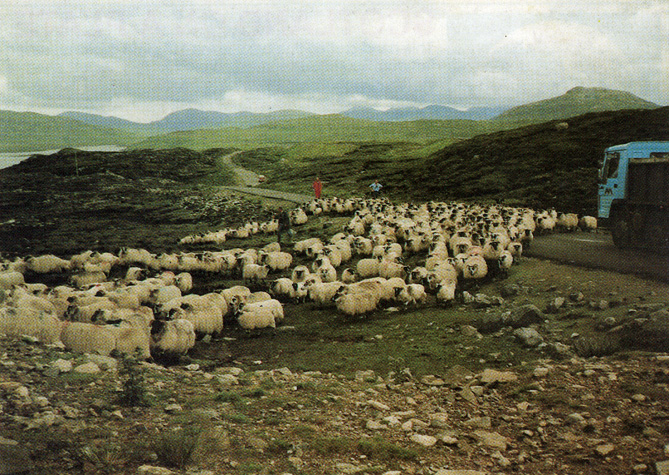 At a meeting held in Crowlista Public School, Miavaig, Lewis, on Tuesday, 30th December 1919 presided over by Col. Lindsay, Morsgail Lodge,Lord Leverhulme’s representative here, and attended by representatives from all the townships of West Uig, it was resolved to lay before the Postmaster General, their grievances and complaints with regard to the very unsatisfactory state of the mail service to and from Miavaig and Callanish.

This is a grievance of long standing, but during the war inconveniences were borne without complaint. Now that the war is over, postal facilities should be improving, but instead, they are actually getting worse, and becoming intolerable.

In November last, the motor launch, that carried the mails between Callanish and Miavaig (being far too small and inequal to the difficulties and dangers of that passage) was disabled and cast upon a desert island, where fortunately, the men, at great risk and peril of life, were able to save themselves, but some of the mails were badly damaged. Since then the conveyance of the mails is dependant on the occasional passage which a sailing boat can effect across the dangerous sound. Owing to rough weather, with contrary winds, tides, etc. it is often unable to make the crossing, consequently great inconvenience, dissatisfaction, delays and losses are caused.