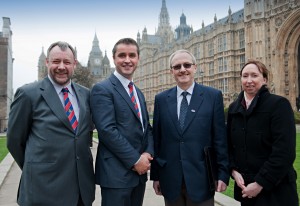 Three members of the Safety First Campaign to save the Stornoway Coastguard station traveled to Westminster on Wednesday for a meeting at the Scotland Office and to lobby MPs in the Houses of Parliament.

In the meeting with David Mundell, Parliamentary Under-Secretary of State for Scotland, the campaign representatives, Carol Collins, Dave Macbeth and Martin Collins (left, with MP Angus Macneil), were able to put their case for the retention of both Stornoway and Shetland Coastguard stations on a 24 hour basis due to the unique and sometimes hostile areas of the UK that the two stations look after.

Also on the agenda was to ask the Scotland Office to support a recommendation that the Transport Select Committee visit Stornoway as part of their inquiry into the Coastguard, Emergency Towing Vessels and Maritime Incident Response Group (MIRG).

“We had a very positive and useful meeting with Mr Mundell in which he agreed to look at making a Scotland Office recommendation to the Transport Select Committee that they visit Stornoway as part of the their inquiry. With Stornoway having all three main subjects of the inquiry based in the town, it was felt that the Committee could use this to the benefit of the inquiry.

“We were able to explain some of our fears about the level of service we currently provide to mariners and public in the North and West of Scotland being reduced if the current plan for the modernisation of the Coastguard service were to be put in place.

“Mr Mundell was very receptive to our opinions and we would like to thank him for taking the time to speak with us.

“Later on Wednesday afternoon we attended the PCS Union’s lobby of MPs in the Houses of Parliament and had the opportunity to speak with a number of MPs about the modernisation plan for the Coastguard. It was gratifying to hear cross-party support for the retention of the Coastguard stations and the appreciation of the job that we do.

“Angus MacNeil MP was our host for the afternoon and he spoke passionately during the lobby about the support that the Coastguards give, not only to mariners and those who use the coast, but also to the other agencies and emergency services during periods of bad weather, such as the recent snow, along with inland searches and mountain rescues.

“Overall it was an extremely worthwhile and rewarding visit to Westminster and we now look forward to the march this Saturday in Stornoway.”

Follow the Save Stornoway Coastguard campaign on the website or get involved.  The march starts at 2pm on Saturday 19 March at from the Town Hall in Stornoway.