A short piece in the Guardian last week describes the modern way of harvesting kelp in South Uist. Uig was a kelp-harvest area too: 40 tons in 1791 and 266 tons in 1833. 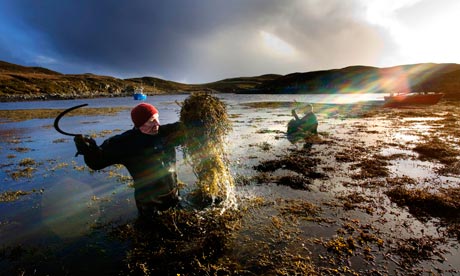 A short piece in the Guardian last week describes the modern way of gathering kelp in South Uist. Uig was a kelp-harvesting area too; Hugh Munro, in the Old Statistical Report of 1796, wrote that “There are about forty tons of kelp annually made at Loch Roag, which is superior in quality to any other kelp in the Highlands of Scotland; this is efficiently evinced by its selling for at least a guinea per ton more than any other kelp.” He gives a figure of 299 kelp-makers in the parish.  The New Statistical Report of 1833 says 226 tons were produced per annum. The place in Uig most immediately associated with kelp-making is the wee island of Cliatasay, off Carishader, where rough pits and deep moorings show evidence of the practice, and the kiln on the point of Vuia Mor is believed to have been a kelp kiln – despite the comments below about this being an idle and unprofitable innovation.  See also Direcleit’s summary of kelping in Lochs. (photo: Murdo Macleod/Guardian)

Robert Buchanan, in The Hebrid Isles (Chatto & Windus, 1883), gives an account of the practice in Uist in the 19th century:

Ever and anon, in the course of these aquatic rambles, you meet a group of kelp-burners gathered on a headland or promontory; and a capital study it would make for an artist with some little Rembrandtish mastery over the shadows. Clouding the background of a cold blue sky, the thick smoke rises from their black fire, and the men move hither and thither, in and out of the vapour, raking the embers together, piling the dry seaweed by armsful on to the sullen flames. as they flit to and fro, their wild Gaelic cries seem foreign and unearthly, and their unkempt hair and ragged garments loom strangely through the foul air. On the hill-slope above them, where a rude road curves to the shore, a line of carts, each horse guided by a woman, comes creaking down to the week-strewn beach to gather tangle for drying. The women, with their coarse serge petticoats kilted high and coloured handkerchiefs tied over their heads, stride like men at the horses’ heads, and shriek the beasts forward…

The manufacture of kelp, although depreciated infinitely in value since Government took the duly off Spanish barilla, is yet carried on to a large extent. The process is very simple – that of burning the seaweed in stone ovens until it leaves the solid deposit called kelp in the raw state; but care and experience are required to produce the best article.

He also quotes John MacCulloch’s The Highlands and Western Isles of Scotland, in a series of letters to Sir Walter Scott of 1824. MacCulloch was a geologist and wrote in very useful detail; the publication is available in full on Google Books.

As the price of kelp varies in the market, the revenues of the proprietors are subject to fluctuations from which the labourers are exempt. When first wrough, and down to the year 1760, the price reached from £2 to £5 per ton; the expenses being then far less than at present. In 1790 it was at £6; whence, as the succeeding war checked the importation and raised the price of barilla, it rose to £11, £12, £15, and, for a short period, to £20. Valuable, therefore, as this species of property may be, it is extremely unsteady; while it is also precarioius, as any great discovery of the long-attempted problems to decompose sea-salt by a cheap process, might extinguish it in a moment. Where the interests are so few, and the total advantages so limited, it could scarcely expect protection from restrictive laws. I must now indeed add, that between the period of writing and printing this, the duties on barilla have been diminished, but that an after-suspension of the law has also taken place. Hence it becomes unnecessary further to alter what I had written; while the present view will tend to show what the effects of the loss on this manufacture are likely to be on the insular population, and how necessary it is that some equivalent, if temporary, relief should be given.

If this manufacture was once ill-understood and worse imagined, it seems now to have attained all the perfection of which it is susceptible. June, July, August and part of September form the period of this harvest. The drift weed thrown on the shore by storms is sometimes used; but, if much injured, it is rejected, as in this state it is found to yield little salt. This kind consists chiefly of tangles, as they are called here, or Fucus saccharinus and Digitatus, which at all times contain less soda than the harder species, and are also much better adapted for manure. The latter consists chiefly of four, the Serratus, Digitatus, Nodosus, and Vesiculosus, and these are cut at low-water from the rocks on which they grow. As the value of a kelp estate depends on the magnitude of the crop, it is therefore regulated principally by three circumstances: namely, the linear extent of the shores, the breadth of the interval between high and low water mark, consisting in the length of the ebb or fall of the tide and the flatness of the beach, and the tranquility of the water of its shelter from the surge: to wich may be added the nature of the rocks, as some kinds are found to favour the growth of the plants more than others. It has been attempted to increase the extent of this submarine soil by rolling stones into the water; but I believe that the success has never repaid the expense. On some estates this harvest is reaped every second year; on others only every third; nor does it seem to be agreed what are the comparative advantages of either practice.

The weeds, being cut by the sickle at low-water, are brought on shore by a very simple and ingenious process. A rope of heath or birch is laid beyond them, and the ends being carried up beyond the high-water mark, the whole floats as the tide rises, and thus, by shortening the rope, is compelled to settle above the wash of the sea, whence it is conveyed to the dry land on horseback. The more quickly it is dried, the better is the produce; and, when dry, it is burnt in coffers, generally constructed with stone, sometimes merely excavated in the earth. In Orkney the latter are preferred. It has been attempted, idly enough, to introduce kilns, a refinement of which the advantages bear no proportion to the expense, as in the ordinary mode the kep forms its own fuel. As twenty-four tons of weed, at a medium, are required to form a ton of kelp, it is easy to conceive the labour employed for this quantity, in the several process of cutting, landing, carrying, drying, stacking and burning.

In general the kelp shores are reserved by the proprietor, who thus becomes the manufacturer and merchant. If, in somepoints of view, this is a questionable piece of policy, it is a practice not easily avoided. The farms of the great bulk of the tenants are too small to allow of their managing the kelp to advantage; nore would it be easy to find a responsible lessee for this part of the estate alone. As there is no class of labourers in this country, the work must also be performed by the small tenants. These, however, are not paid by money wages; but, being the tenants on the estate itself, a portion of their rent is thus imposed and received in the form of labour. Thus two pounds a year, and the manufacture of a ton of kelp, will represent the average rent of a farm here valued at five pounds.

The Hebridean Seaweed Company gives a good history of the industry in general.   The industry is on the rise again and is believed to have great potential for the economy of the Western Isles.