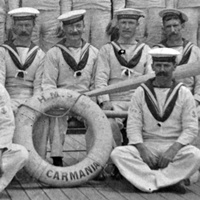 A photo of Lewis crew aboard HMS Carmania, which engaged and sank the German ship Cap Trafalgar off Brazil in 1914. The only Uig man known to have served on the Carmania was Donald Macritchie, 7 Aird. 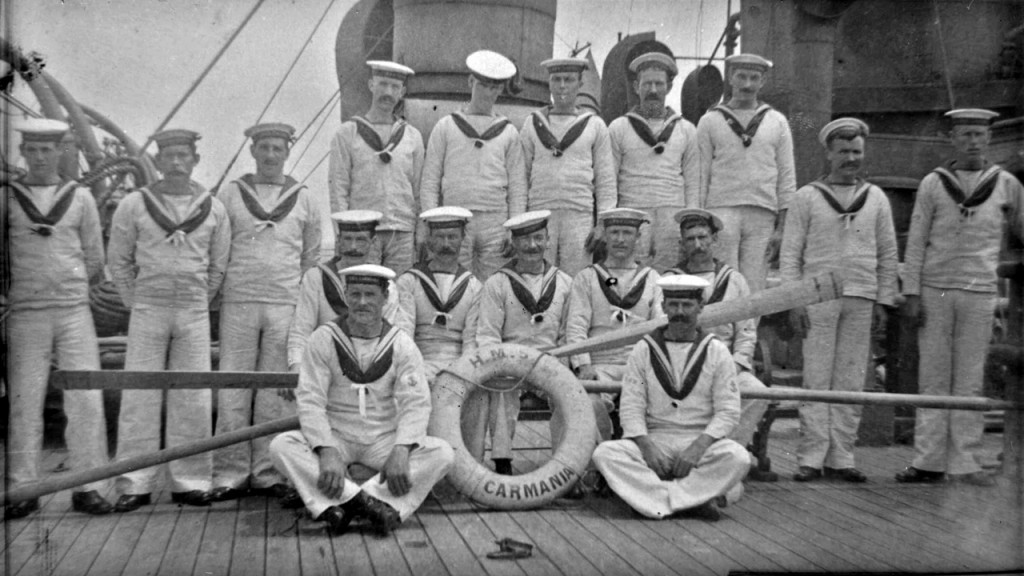 The picture from our collection shows a group of sailors aboard HMS Carmania during the Great War. HMS Carmania was a Cunard liner (built 1905) which was converted into an Armed Merchant Carrier, and later served as a troopship. In the very early stages of the war, on 14 September 1914, she engaged the German Cruiser SMS Cap Trafalgar off the coast of Brazil, sinking the German ship, while taking 79 hits, sustaining considerable damage and losing five of her crew, including one Lewisman, AB Kenneth John Macleod, RNR, from 7 Ranish.

The photo is inscribed “Lewismen on the Carmania” though we don’t have any identifications and don’t know if all of these are indeed Lewismen. Those known to have served on her besides KJ Macleod from Ranish include Allan Macleod, Donald Macleay Sr, Donald Macleay Jr and John Martin, all from Upper Shader, and at least one man from Uig, Donald Macritchie from 7 Aird Uig (Domhnall a’ Geamhraidh, Doy’s father) who, as a Naval Reservist, was present during the engagement with the Cap Trafalgar.

There is an exceptional amount of well-researched information about both ships and the battle at this website -and three-quarters down this page, a smaller group of sailors taken in what seems to be the same position and possibly on the same day. Is our fellow with the large mustache, seated right, the man on the right in this other photo? If the pictures are a pair, they date (according to an identification in the small group) to between 1914 and 1916.