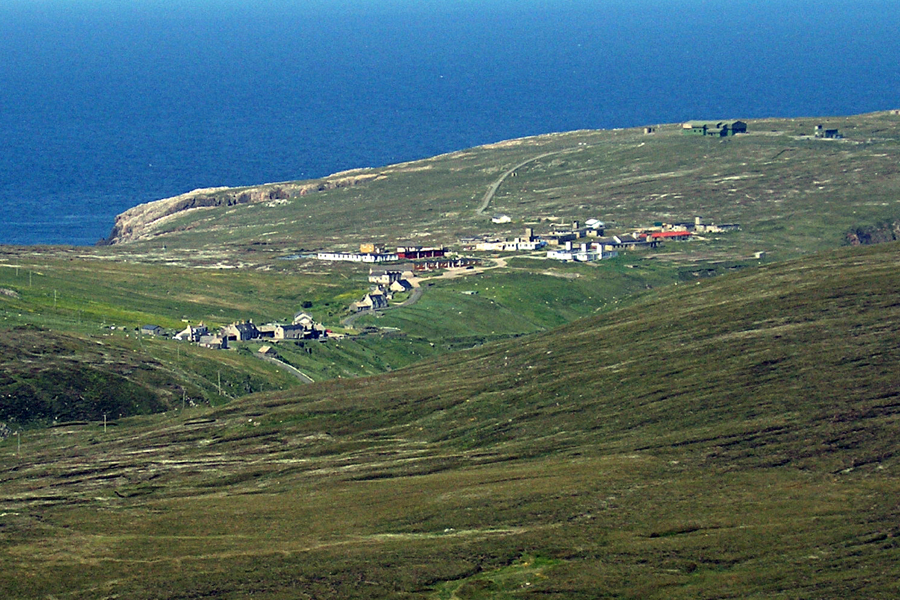 There are ten crofts, as the enlargement of one of the original nine was subsequently split off to make a separate croft.  Of these, one tenant is an absentee and another an elderly woman who does no cultivation.  In both these cases, grazing is let to others so that there are actually eight operative units. The crofts are fenced in their upper portions, but in most cases the fencing does not extend down to the river and there is free access to the single concrete footbridge which spans the stream.  The only crops now grown are oats and potatoes and a few vegetables, with some sown grass; natural grass provides most of the hay crop.  Lime and shell sand and artificial fertilisers are used; the two former particularly on the ground near the river where the cultivation is in narrow strips separated by drainage ditches and ploughing is done by horse.

Most of the cultivated land is on the gentler slopes behind the houses, where the use of a tractor is possible. Before 1914 most of the land within the original turf dyke was culti­vated; bere was grown and ground at the mill for meal for barley bread.  Seaweed was extensively used as a fertiliser and most of the families kept eight or nine cows, so that there was a more plentiful supply of manure.  Now, six of the families each keep one cow for domestic milk supply (two of the others each keep a goat).  The township possesses no bull, but make use of those at Valtos or Ardroil. On the other hand, the sheep soum is generally exceeded; instead of the entitlement of about 200, the total flocks grazed on the township pastures are approximately 500.   The lambs are weaned early in August and put on Rudha Caol (Air Force use has not prevented this) and wedders are usually sold at the age of two or three years in Stornoway – many in October to reduce the numbers that must be pastured during.the winter.

The total resident population of Aird consists of fifteen males and sixteen females. Of these, twelve are over 65, six are aged 45 – 64, 11 are in the 15 – 44 age-group (there are only three married couples) and there are two children under 15.  Nevertheless, most of them are complete families; only one person lives alone; no members are reported as periodically working away, no men and only two women are permanently away.  Neither has there been much emigration since 1939 – five women only have married out of the parish.    The tenants of seven of the crofts are over the age of 65, the only one in the 15-44 age group is a newcomer to the district and does little croft work.

It is obvious that crofting no longer affords a livelihood in Aird; the only two families without ancillary occupations are those where all the members are elderly.  Of the other with members in the working age-groups, five have one or more members employed in a civilian capacity at the RAF station and there are five regular weavers.

Aird used to be a self-contained community; the land was fully cultivated and a certain amount of fishing was carried on in spite fo the difficulty of drawing up the boats over the rocky beach.  Now it is prosperous, but very much dependent of the RAF stations, and if this should ever close down, most of the younger people would have to leave in search of other employment.