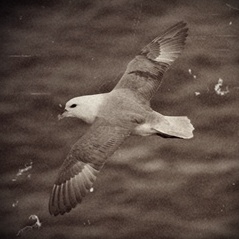 From the Royal Edinburgh Society, an account of birds observed or discussed by Professor Duns during a visit to Lewis in 1865, when birding was largely about shooting. Includes a comprehensive species list and a theory on why house-sparrows dislike blackhouses.

From the Proceedings of the Royal Edinburgh Society, 1865-66 (Vol 5), an account, purporting to be comprehensive, of the birds of Lewis as observed by the author . Professor Duns, in the summer of 1865, during a visit to Stornoway, Bernera and Uig. For the full piece and his bird list (annotated with modern binomials and web pages) see here; we’ve also transcribed, from the same paper, his list of mammals, reptiles and snails.

On the Natural History of Lewis
by Professor Duns, DD, FRSE

Many of the birds came under my own observation. Others are named from a collection preserved at the gamekeeper’s lodge, near Stornoway Castle. Several of the rarest forms are among these. For the names of others I am indebted to Mr Liddle, farmer, Gress, an intelligent and trustworthy observer.

Not fewer than ten species of Falconidae occur in Lewis, or in some of the islands on the east and west coast. The golden eagle is seen throughout the year; in winter singly, in summer often in pairs. The belief is common among the people that this species takes salmon, as well as hares, moorfowl, &c. the while-tailed eagle, in its turn, poaches on the territory of the golden one. It has been often known to take lambs as well as salmon, and is said to have killed a fawn in Mhorsgail Deer Forest. The fishing osprey is more common than either of these. It nests in the Shiant Islands, and may not unfrequently be seen on the Uig coast. The jer-falcon is only an occasional visitor. It is more frequently seen in the Flannen Isles, on the west coast of Lewis. The peregrine falcon is observed throughout the year. It is noted as a bold hunter and very destructive to young grouse. When pressed by hunger it will attack the old also. Its favourite prey is the rock pigeons, which abound on the west coast especially. the merlin was once abundant, but is now comparatively rare. The sparrowhawk is common. The kestrel is not so. Two snowy owls were shot at the Butt in 1855, and one at Uig in 1859. the common and barn owls are comparatively rare. A good observer described to the author a species which he had once seen, as small, bare on the toes, brown above and yellowish below. The description suggested Noctua nudipes [Athene noctua] of Gould; but this is of very rare occurrence in Britain, and even on the Continent it is seldom met with north of lat 55°.

Among the Corvidae, the raven and grey-backed crow are common. Both of these birds are very bold, and destructive to grouse. The former not unfrequently attacks diseased sheep, and picks their eyes out before the animals are dead. Several of the latter have been seen to attack the female grouse, when covering her young, driver her away and fly off with a young bird each. both build in the wild cliffs overhanging the sea, but they are often met with in the moors. The rook is rarely seen in Lewis. It is noticed only as an occasional visitor in the winter, and, when disturbed, takes flight in the direction of the mainland; yet there is abundance of food for it. Not only does the earthworm abound, but many hurtful grubs also. Cultivated patches were pointed out to me as having been destroyed by mildew, but on pulling up the plants by the roots, numerous wire worms of Tipula and Elator were seen.

The jackdaw is absent, but the starling, which in many of its habits resembles this bird, is very abundant. The starling builds in the holes of rocks, and seems to be much more particular about its nest than it is in the south. In Lewis it uses moss and wool as a lining, and is often seen on the sheep’s back, not feeding on the ticks, which it sometimes does, but quietly pulling out the wool for nest lining. Six species of the family Turdidae occur. Of these the dipper is the least common. The ring ousel is met with in summer. An interesting illustration of what might be called the adaptive power of instinct came under my notice in the little island named Pabba, near the Uig shore. On the 15th of June 1865, when examining the rocks of the island,   with a nest of the common thrush, containing four eggs. In placing it at the top of a sand-covered rock, over the edge of which long stalks of lyme grass drooped, the bird had availed itself of these for a kind of cradle for the nest. Indeed, some of the leaves were woven into the outer covering of the nest, which was thus hung out over the bank. In the Lowlands the favourite nesting-place of the thrush is a tree or a bush, but as these are of rare occurrence indeed in Lewis, the bird yields to circumstances, and places its nest in the hollows of the rocks, or on the top of sand-banks near the shore. In this case it had managed to place it where it would swing in the breeze. The nesting time of the thrust in the south is in April and the beginning of May. These birds occur in great numbers all over Lewis. The missel-thrush and redwing appear in winter. In the south the former is most common, in the north the latter.

The lark may be named the bird of Lewis. On every moor, in every cultivated spot, inland or along the shore, wherever there is a bit of turf, you meet this bird. Some have thought that the increase of starlings in the Lowlands has thinned the number of larks. In Lewis both are very abundant.

Among the Fringillidae, perhaps the least common is the house-sparrow. “A pair of sparrows,” says James Wilson, in the work referred to above, “built in Stornoway in 1833, but we did not see their descendants in 1841.” I believe that the date of the introduction of the sparrow into Lewis is correct. They are now spread all over the country; but in few localities, except in Stornoway, do they breed in the eves and thatch of houses. Even the sparrow turns away from the wretched huts in which the majority of the people dwell. Here, again, we have an illustration of the influence of habit on instinct. Were a sparrow to build a next in the thatch of one of these wretched hovels, it would be almost sure to be destroyed when the eggs were dropped. To prevent the escape of smoke almost all the huts are built without a chimney. Windows occur is very few of them, and the doors are smaller than those of cottages in the Lowlands. The object of this is to direct the peat smoke into the loose thatch, in which the soot may lodge. In spring this part of the covering is taken off, and spread over the “lazy beds,” in which barley and green crops are to be raised. Thus manured, they yield abundant crops. The sparrow has been taught the uncertainty of tenure in such roofs, and builds its nest in the holes of rocks instead of the habitations of man.

The Columbidae are represented by the rock-pigeon and the wood-pigeon. The former is very abundant; the latter is only seen occasionally in spring or in autumn. Some years ago one of Sir James Matheson’s keepers shot a specimen of the turtle dove. This, I believe, is the only instance in which this bird has been met with so far north.

One species of Gruidae, the grey crane, has several times been shot in severe winter weather. Of the Pluvialidae, the golden plover is very abundant in the moors during summer. In winter it retires to the shore. The dotterel is seen in June and July, and the ring-plover is very abundant throughout the year. Mr Macgillivray [the naturalist – see his 1817 visit to Uig] says that the lapwing is of extremely rare occurrence in the Hebrides. This is a mistake; I saw it frequently. Its habits as to change of place are similar to those of the golden plover. The turnstone is met with during winter. The oyster-catcher is abundant. I found several nests on a shelving rock near Gallan Head, with eggs in them, on the 14th of June. In some the shell was beginning to break, and the “peep-peep” of the chick could be heard. In the Fern Islands the young of this bird appear a fortnight earlier. The nesting-place was a hollow in the large rock, without lining of any kind.

The common heron is often observed in winter; very seldom at any other season. The water-rail is not common. It is found throughout the year. The land-rail [corncrake] arrives between the middle and end of May; but a curious fact was brought under my notice in regard to it: its cry is frequently heard in Bernera, Uig, ten days or a week earlier than in the Long Island itself.

No fewer than nineteen species of Anatidae have been met with in Lewis. Among these, the grey lap and bean goose are seen occasionally in winter; the pink-footed or short-billed goose breeds in the Flannen Islands; the white-fronted goose, the swan, shieldrake, velvet and black scoters, appear in winter; the pintail teal is rare. The wigeon has frequently been shot in Lewis, though Mr Macgillivray says, “In the north of Scotland they are uncommon; on its north-west coast scarcely ever seen; in the Outer Hebrides, I believe, never.” The broad-billed scaup duck is a rare winter visitant. The eider duck breeds in the Flannen Isles. I saw a pair which had been brought to Bernera two days before my visit.

I observed a pair of the golden-eye on a small lake in Uig in June. I watched them with a field-glass for about an hour. One of Sir James Matheson’s keepers was with me, but they never came within gun-shot. The gooseander breeds occasionally in the district.