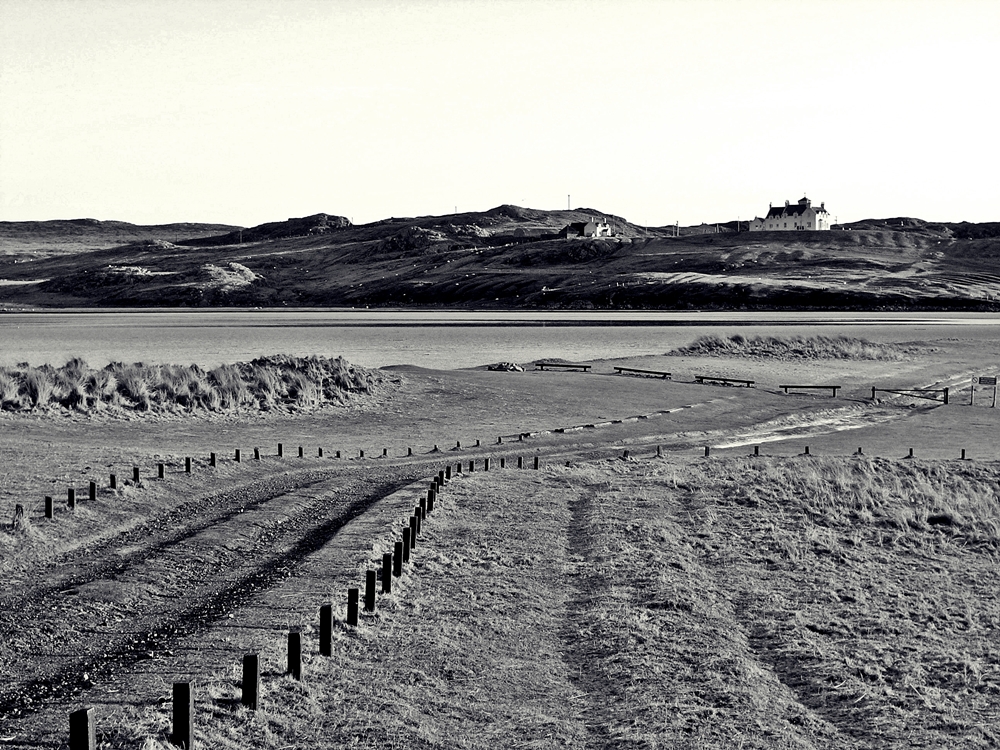 From Emily Macdonald’s Twenty Years of Hebridean Memories (1939). In 1923 Emily, niece of Lord Leverhulme, was married to Donald Macdonald, Dolly Doctor, who had Uig connections and later wrote Tales and Traditions of the Lews. They were given Uig Lodge as a wedding present.

Stornoway was reached some six hours after leaving Kyle, and we went that summer evening to my mother-in-law’s house in New Street, where we had arranged to stay for part of our holiday. It was while we were at New Street that I spoke a few joking words which afterwards led to our possessing Uig Lodge and Gisla. My uncle came to have tea with us one afternoon, and during the course of his visit, told us of his failure to come to an agreement with the Government over his schemes for the welfare and development of Lewis. Something was said about giving up the Island, and I said, “If ever you think of selling Uig Lodge, give me first refusal.” I knew, of course, that we couldn’t even think of buying a property a quarter of the value, but it was just one of those things one says on the spur of the moment.

A few weeks after our return to London, my uncle asked us if we would like to possess Uig, and we went over to Hampstead to discuss the matter with him. Of course, I need hardly say we were delighted to accept such a wonderful gift, but there were various details to be considered. My uncle wished to give us the Lodge with its attendant fishing and shooting rights, but did not wish to burden us with the worries and responsibilities of the hundreds of crofts in the district. On taking legal advice, however, it was found that though one could possess fishing rights without land, one could only be the owner of shooting rights if one owned the ground also. My uncle saw the pitfalls in this arrangement at once. Among other difficulties, should any of the crofters default on their rent, we should find ourselves out of pocket, as it is certain that we could not do likewise when it came to our paying the rates. Over a large area like Uig (it is a hundred square miles) this might become a most serious situation. Anyway, the end of it was that my uncle suggested we should try to run the estate intact, and if it proved too much of a burden, he would take the land with its shooting rights and crofts back again. To safeguard our private property, he made his gift in the form of a limited company, so that should the estate go bankrupt, at least we should not lose more than itself.

Well! It was not very long before a crofter decided he would like to leave his croft and go to live in Stornoway. Accordingly, he did what he was fully entitled to do under the Crofters’ Act, namely, to put in a claim to us for compensation for improvements he had made to his house and croft. These he assessed at £1200, a figure which was ridiculous on the face of it. The claim was put before the Land Court to judge between crofter and landlord, but long before it was settled, we had handed back the land to my uncle, as we realised from this claim that it was not for people in our position to carry such a dangerous burden. We thought the man would probably be awarded about £200, and this was just about the sum he eventually got, but besides £200 being a sum we couldn’t afford to lose, there was always the possibility of ten or more crofters suddenly deciding to leave their crofts tenantless and coming down on us for £200 each.

We were now the possessors of Uig Estates Ltd, which consisted of Uig Lodge, keepers’ cottages at the Lodge and Hamnaway, fishing rights in the whole of Uig and round its coast.  The land, shooting rights and crofts were put into a company called Uig Crofters Ltd, and before long this was sold to a Mr Bremner.  Uig Lodge was itself let at the time of our taking it over, and it has been let ever since to the same tenants.  After we had given up the crofting area the shootings had to be rented from Uig Crofters Ltd.

Before many years had passed, we realised that for one reason or another, the upkeep of the estate was costing a larger sum than that coming in for rent.  So after consideration we asked our tenant for £100 more rent per annum when we renewed the lease.  Imagine our annoyance, and I have no doubt our tenant’s too, when the rate collector put up the rates by just sufficient to put us into exactly the same position as before!  We were not a penny better off and our tenant was £100 to the bad.  We decided that this state of affairs could not go on indefinitely, and so when the lease again expired, we offered the Lodge and fishings to our tenant for a nominal annual sum out of which we would pay the insurance of the property.  He on his side would pay all the usual outgoings of a Highland estate, rates, wages, repairs, etc, etc.  This arrangement remains in force till the time of writing, but I am sorry to say that thought the rate collector was quick to raise the rates with the raising of the rent, he showed no haste to lower them to a sum corresponding in value to the new lower rent.