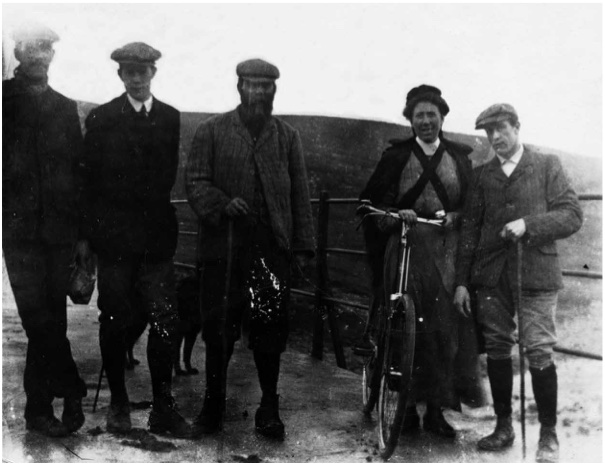 Nurse Annie Maclean. Provision of nurses after the setting up of the Highlands and Islands Medical Service which was established as a result of the Dewar Commission recommendations.

As the First World War approached, Uig had remained impoverished and overcrowded. The Dewar Committee (1912) had the remit of examining medical provision throughout the Highlands and Islands. The report was seminal, in its own way as significant as the Napier Commission’s, and the committee did not equivocate about what they found, particularly in Lewis. “That such a condition of affairs as we found in Lewis should exist within twenty-four hours of Westminster is scarcely credible. Nor is it creditable from a national standpoint”(p.16).

Death from consumption, pulmonary tuberculosis and recurrent outbreaks of typhus, and in children, from complications arising from measles, whooping cough – from which 52 Lewis children died in 1911 – and diphtheria were symptomatic of poor, overcrowded and unhygienic living conditions. Even by an early twentieth century Hebridean benchmark, the scale of deprivation in Lewis appeared exceptional. Dr Donald Murray, the District Medical Officer of Health, described:

“… the grossly defective housing of the people. Houses of practically one room, with damp walls, damp clay floors, sunless interiors, a vitiated and smoky atmosphere, and the cattle under the same roof with the human inmates, the surroundings usually badly drained and the site often damp. When a case of phthisis occurs in one of these houses, isolation is impossible. In too many cases the patient spits on the floor, and on the floor of churches and meeting houses, scattering tubercle bacilli all around. When one considers also the cattle being infected with tuberculosis under the conditions prevailing, what else could we expect than a wide prevalence of the disease”.